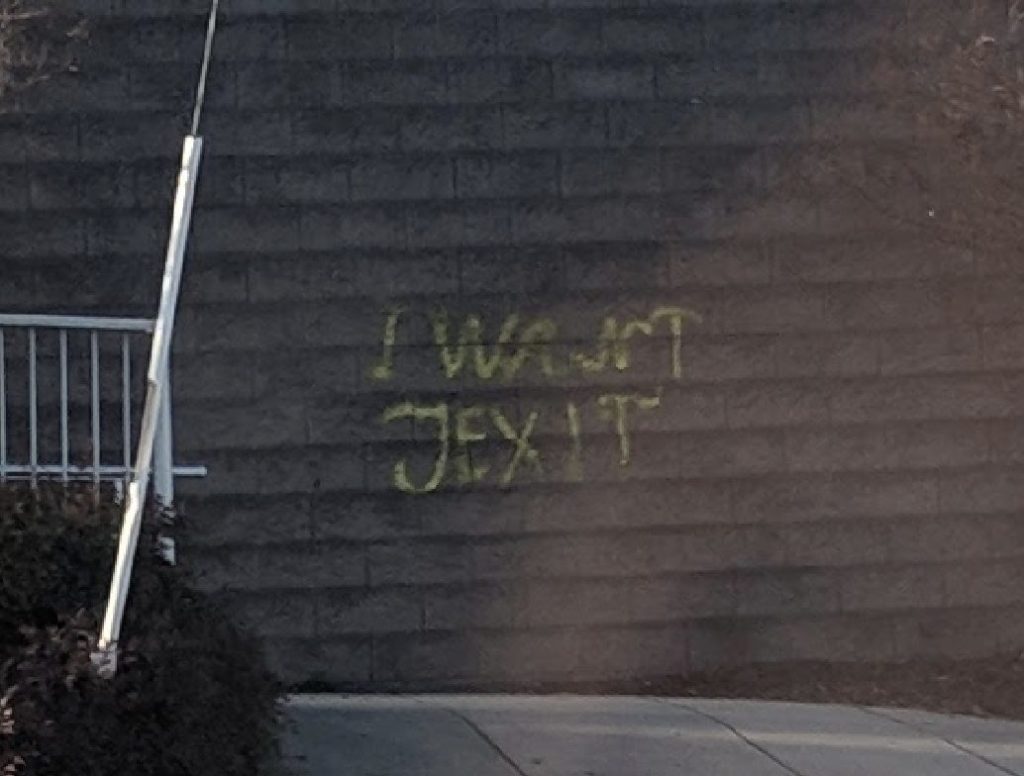 1217 Brentwood Rd NE back in December from Mathew

Ed. Note: There had been a rash of anti semitic graffiti back in December with ‘I want Jexit’ sprayed all over town.

“The Fifth District is investigating a Defacing of Public Property offense that occurred on Friday, January 18, 2019 at approximately 02:44 am.

Hate speech words were found spray painted on sidewalks located in the 1000 and 900 blocks of Brentwood Road, NE.

“According to Metropolitan Police, the hateful messages were found around 3 a.m. at two auto shops in the 1000 and 900 blocks of Brentwood Road. The words “I WANT JEXIT!”, were found scrawled in front of Shalom Tire and Auto repair by WUSA9 reporter Mikea Turner at one of the scenes.”

“MPD has been investigating several incidents of similar graffiti over the past month stating “I want Jexit.” We have been discussing it with national leaders on hate crimes, such as the Anti-Defamation League and Southern Poverty Law Center, as well as local leaders in the Jewish community. At this time, there is no consensus on what it means, or whether it is motivated by hate.

We recognize that regardless of the meaning of the graffiti or the intent of the offender, it is causing concern in the community and there is a perception that it may be anti-Semitic. MPD wants to reassure the community that we and the Bowser Administration are taking this very seriously. The Mayor’s Director of Religious Affairs, and Monica Palacio, the Director of Human Rights, are speaking with members of the community. We will continue to investigate this and ask that anyone with information about the graffiti contact us.”

Next
Scuttlebutt: Sweetgreen could be coming to the former Taylor Gourmet space in Penn Quarter!!