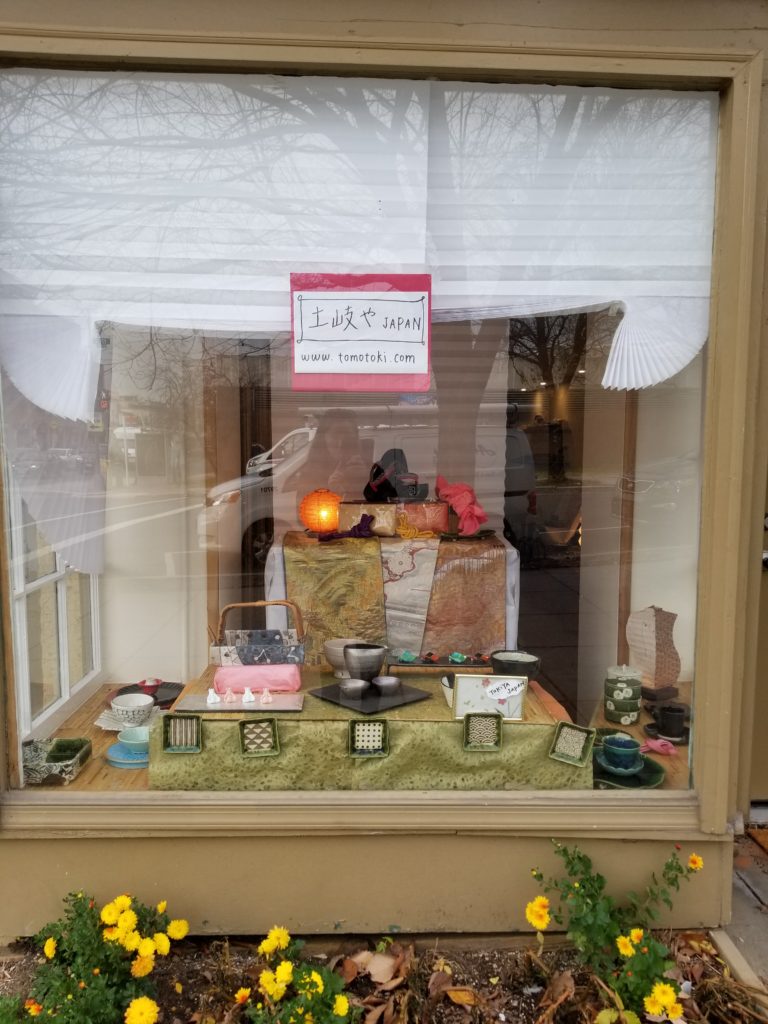 Thanks to Beth for sending:

“Saw this around the corner from Hana Japanese Market, on 17th Street. Looks like a Japanese pottery store will move in soon. Wonder if they’ll collaborate with Hana for any events!”

“Born and raised in Toki, Gifu, the founder “tomo” grew up being surrounded by the authentic Minoyaki pottery, which has a rich history and tradition dating back to the 7th century. It flourished during the Momoyama-Period (16th century) supported by the most influential tea master Sen-no Rikyu and under the patronage of Shogun Nobunaga.

Minoyaki Pottery has always been part of people’s lives in Toki, helped shape a large part of tomo’s esthetics as she grew up. For many generations since 1792, her family owned businesses including a kiln workshop, now evolved into industrial ceramic creation managed by her eldest brother as the 7th successor. Being young and curious, (and a bit desperate since she lost her parents during early childhood and raised by grandparents, needing to become independent with a job that provides a long-term security) tomo chose her primary career as a teacher in public education that was considered as one of the most stable and respectable jobs for women in Japan.

After graduating from college in Nagoya, she taught at secondary education schools, including those years working with children with mental and physical disabilities during which she had exposure to Art Therapy. Working with kids and families in marginalized situations gave her many eye-opening moments, motivated her to learn more about education policy development with focus on inequality, teachers, and social protection.

During her doctoral study in the US, tomo took apprenticeship under the Paulo Freire Institute and gained in-depth understanding of critical pedagogy and sociology of education. After obtaining Ph.D, relocating from CA to DC, she landed a job at an international organization serving for the children and teachers in developing countries. She belonged to the Human Development unit and led project operations and analytical work in many countries in South East Asia, Middle East, and Africa regions in close collaboration with the Ministry of Education, donor partners, UN agencies, NGOs, and other education stakeholders.

During her service at the international organization, tomo has witnessed the power of art in empowering the people affected by the conflict and fragility. IDP and refugee children showed great amount of resilience, promoted by simple yet creative forms of arts and plays: singing, dancing, drawing, etc. Through interaction with artists who were dedicated to support children in adversity, she was astonished by the power of photography in making a profound impact on those children’s lives.

While working closely with the children and the governments affected by poverty, violence and conflict in the world, she realized that those issues are not completely nonexistent in her own country. Many people in rural areas in Japan are suffering from a new form of poverty; youth and eldery struggling with complex social and economic issues. Those are often masked and not widely discussed. She also realized that she has not given back to her own “furusato-hometown” so much while busy traveling far away all across the world.

Through many years of comtemplation and local consultations, she became determined to contribute more to her own country, applying the knowlege and experience gained from other parts of the world. She has been forming a group of creators and supporters, slowly but surely.

With the launch of TOKIYA, our goal is to revamp the once-prosperous-now-shriking local industry – pottery making in our own hometown Toki. It is our mission to revalitize the community by re-defining Minoyaki, connecting the local artists with global markets to share the beauty and joy of pottery making as an form of art and a way of living.

Forming a great alliance with Minoyaki creators – young, emerging and seasoned – in partnership with the public sector and academia in the Chubu-region of Japan, we are here to showcase the deep world of Minoyaki.

We also aim to shed lights on other specialized items from rural Japan that marry tranditional and contemporary styles. All items are made in Japan, carefully hand-crafted by seasoned artisans and craftsmen from vairous local communities. By cherishing arts and beauty, peace could be promoted in people’s heart, mind and action – that is our wish and mission starting here, from this little shop in DC.

If you wish to meet with the founder & team, please email at [email protected]”