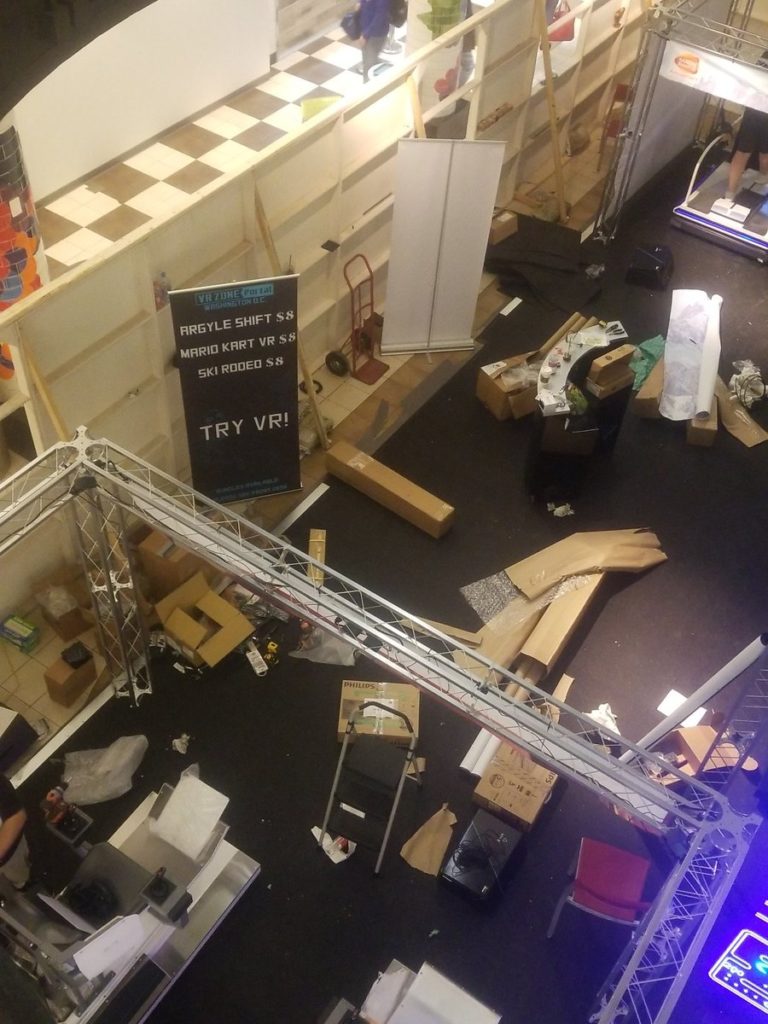 “Union Station will be the first location in the U.S. to have the licensed Mario Kart VR as well as two other games. The games use the innovative HTC Vive equipment.

The official opening is October 1, and will be in location for 6 months. Each game is $8, and it is first come first serve.”

“VR ZONE Portal US – In a move that will delight Virtual Reality fans across the Washington D.C. area. BANDAI NAMCO Amusement America is bringing the hugely successful VR ZONE Portal experiences from Japan and the UK to the historic Union Station in the USA. The games included in this launch include the highly anticipated Mario Kart VR experience, Argyle Shift, and Ski Rodeo.

Launching in late September, VR ZONE Portal Washington D.C. will be located within the historic Union Station just off the national mall in downtown Washington D.C. One of the most popular games featured at this location will be “Mario Kart VR”. This highly anticipated title is a multiplayer VR experience inspired by Nintendo’s popular Mario KartTM games. Fans will be able to race through the iconic Mario Kart world as either Mario, Luigi, Peach, or Yoshi.
Running off the award-winning HTC Vive VR system, Mario Kart VR will not only feature industry- leading graphics but, in homage to the original game, Vive’s Tracker technology will allow players to reach up and grab classic items like banana skins to pelt their opponents with. Additionally, Mario Kart VR will boast haptic feedback capabilities, creating a truly four-dimensional experience that allows players to feel every single twist and turn.

Steve Ignarski, National Sales Manager for BANDAI NAMCO Amusement America, said “BANDAI NAMCO is thrilled to be a part of the innovative, cutting-edge project that is VR ZONE Portal. The launches in Japan and the UK brought great success, and we hope to follow suit in Washington, D.C. Mario Kart VR is a long-awaited title and we have no doubt it will be well-received in the states, due to its incredible, immersive game-play and outstanding equipment from HTC Vive.”
Another title featured in this location, the single-player Argyle Shift, places you as the test pilot on a mission to drop your robot into a designated zone. Set in Japan in A.D 2145 where two corporations govern the land, there is an enemy attack during flight forcing you to engage in battle with the help of ‘Eine’, your Artificial Intelligence humanoid friend. The motion seats move in synchronisation to match your piloting skills of the giant mech.

If racing through Mario Kart or blasting off in a giant robot is not your style, then you can race down the slopes in Ski Rodeo, the virtual reality alpine skiing game. The Ski Rodeo experience allows you to virtually ski at high speed down the steep slopes of a vast snowy mountain range. Featuring a moving motion base, which replicates skiing, the game matches your movements on the slopes and includes fans that blow the mountain air in your face. Ski Rodeo allows you to feel as though are truly skiing down the slopes, creating an exciting atmosphere like no other.

These experiences will be featured for 6 months in a limited engagement at Union Station in Washington D.C., so you will want to make sure you get a chance to experience VR ZONE Portal for the first time in the states.”