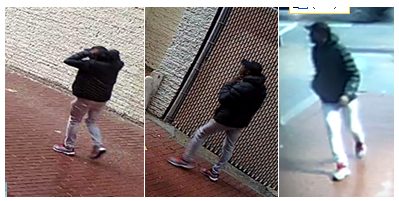 “Detectives from the Metropolitan Police Department’s Third District seek the public’s assistance in locating a suspect in connection with an Assault with a Dangerous Weapon (Gun) offense that occurred on Tuesday, May 22, 2018, in the 3300 block of 14th Street, Northwest.

At approximately 6:23 pm, members from the Third District responded to the listed location for the report of a shooting. Upon arrival, they located an adult male suffering from a gunshot wound. DC Fire and EMS responded and transported the victim to a local hospital for treatment of non-life threatening injuries.

The suspect was captured by a nearby surveillance camera and can be seen in the photos below and in this video:

Read more →
More Stories
Is this your bike?Flip It Closes in Petworth, Consolidates at new(ish) LJ Diner location in Columbia Heights