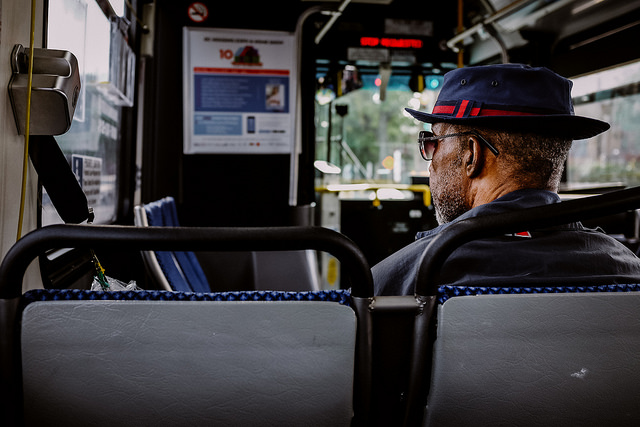 Three weeks ago, I was driving south down 15th Street towards L Street NW. There was a large truck in the right lane, so I switched to the left lane. I then signaled back to the right lane and came to a full stop at the red light. A few moments later, I heard a loud bang coming from the back right side of my car. I realized someone on a bike had hit my car, and he pulled up to my passenger side window, and said “I’m sorry, that was my fault, I was too close to your car.” He asked if I was ok and I did the same. We both were fine.

He had not been riding in the the bike lane that was 5 feet to the right of the vehicle lane, but rather he had driven in between the large stopped truck and the bike lane and then directly into the back of my car. I guess when he passed the truck, he didn’t see my car to the left of the front of the truck and ran into it.

He started to leave, but I asked him to wait so I could see if there was damage to my car. Indeed, there was a large dent on the trunk (presumably from the handlebars?). I asked for his information and he let me take a picture of his license and gave me his phone number.

That day, I texted him and told him that I was taking the car in to get an estimate on the repair, and asked if he wanted to use homeowner’s/renter’s insurance or pay the repair fee, and thanked him for offering his information on site. He texted me back and said “thanks for reaching out, I will check with my insurance.” The estimate to fix the car was $360 due to a 3 inch wide and 1/2 inch deep dent in the back right trunk, and I went ahead and fixed it the next week.

I then texted him again and said that I had repaired my car and asked again if he would be using insurance. He said “what was the total?” and I texted him back with the total and offered to email him a receipt. He then texted back the next day “OK – I’m seeing a specialist for my hip and then I can give you a final decision.” To which I replied “Is this in relation to when you rear-ended my car with your bike when I was stopped at a red light? Sorry to hear that, if it is.” To which he replied, “It is thank you.”

My question is 1) What should I have done in this situation? Should I just drop it?

2) Is a biker at fault when they hit a stopped car and damage it?

3) If so, how do I resolve this? If I go through my insurance, the deductible is higher than the cost of the damage. He is clearly not willing to pay or even try to, and now I feel like he is using a threat of personal injury, even though my car was not moving and he hit it from behind.

4) Is he really threatening me with this “specialist for his hip?”

5) Is it worth bringing a suit in small claims court? Or is that overblown?

I just need some advice and would love to hear what the PoPvillers have to say. I’m really just not sure what I should do. Thanks so much.”