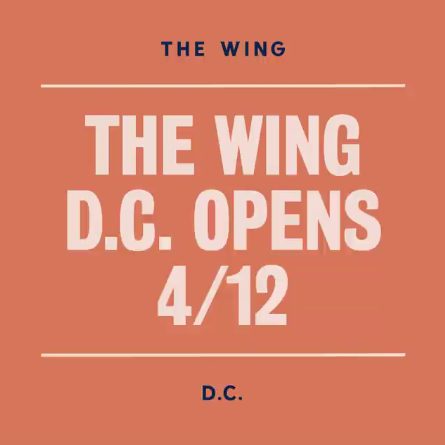 Ed. Note: WAMU notes, “In the District, any business that holds city-granted licenses or permits is subject to D.C. human rights law, which bars discrimination on the basis of sex or gender identity…D.C.’s Office of Human Rights could also launch its own investigation into The Wing. But city officials don’t appear to have the company in their crosshairs.”

“The Wing, a network of co-working and community spaces for women, is opening its fourth location (and first outside of NYC!) at 1056 Thomas Jefferson NW in the Georgetown neighborhood of Washington, D.C.

“Opening in Washington, D.C. allows us to welcome a new community of women to The Wing. We’re excited to invite the women who are fighting for change and rewriting the rules of politics into our space to share their mission with our members,” said co-Founder & CEO, Audrey Gelman.

Additional amenities of the 10,000 square foot space include a wellness and exercise room, bleacher seating for events, and The Wing’s largest female-centric library to date.

The Georgetown space has a special significance in women’s history. 1056 Thomas Jefferson NW was once home to the first all-female architect firm, run by the fearless Chloethiel Woodard Smith. The firm had a significant impact on the development of Downtown D.C., including the preservation of the historic Pension Building, the three office buildings on the corner of Connecticut Avenue and L Streets NW, dubbed “Chloethiel’s corner” by The Washington Post’s Architecture Critic, and the Capitol Park Apartments, just to name a few. The Wing has named a conference room after Chloethiel to honor her time leading the largest female-run architectural firm of her time and her ongoing legacy of women’s empowerment.

The Wing has partnered with The Strand Bookstore to curate an all-female lending library with over 2,000 titles, which range from feminist theory to contemporary women’s Additionally, The Lantern, non-profit bookstore owned operated by Bryn Mawr Alumnae, has put together a Wing Women Reading List of 50 must read titles, which will also be available in the Georgetown lending library.

Washington’s take on The Wing’s cafe, The Perch, will open with an expanded menu that features healthier options, seasonal specials, and delicious treats that make you feel right at home. A full service bar will also be available in the evenings featuring custom cocktails and wine. We will be working with women-owned food & beverage companies like Vaughan Cheese and Republic Restoratives to stock our menu with DC’s finest.

Throughout the space, The Wing Georgetown features a gallery of works by prominent female artists curated by Wing member and collaborator Lolita Cros.