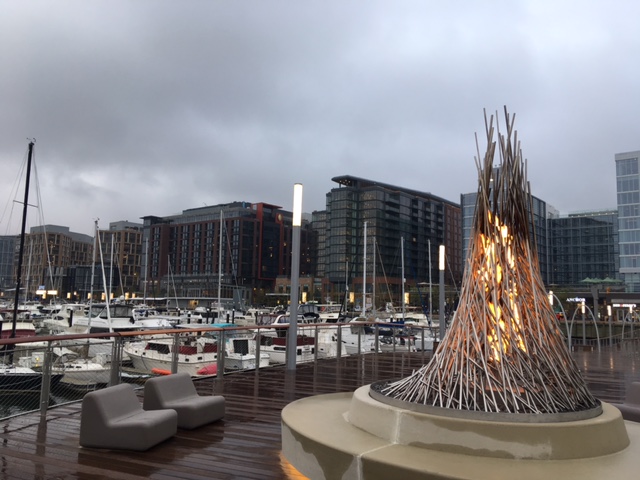 Had a Gilt City voucher for brunch at the Brighton (more on that later), so we ordered a carafe of mimosas and two entrees. The English breakfast was okay, a bit flavorless, and only had two pieces of mushrooms (not even a whole mushroom) even though it is one of the several main components of the dish. The salmon bagel seemed okay as well, but nothing on the menu jumped out at us, so we played it safe. The 1-liter carafe of mimosas seemed to be 90% orange juice and hardly any bubbly at all. For $27, that’s ripoff territory.

Our server, Lyndsay, was wonderful and warm and treated us well. The management needs a bit of work though. Our Gilt City voucher had expired two days earlier, but, as various laws and rules dictate and as written in the fine print (confirmed to me by Gilt themselves), the Vendor (i.e. the restaurant) is obligated to honor the face value of the voucher ($40 in this case) as part of the payment for the bill. First level manager brought it to the second level manager, and finally to a third manager who tried to tell us that we were wrong, Gilt is wrong, and they would not have anything to do with the voucher. Basically told us to pay the full bill and try to get our money back from Gilt themselves.

Besides being wrong and in violation of Gilt’s terms, the final manager was abrupt and unhelpful, bordering on rude. Lucky for us, Gilt did apologize to us for the incident and gave us a refund for the voucher. Plus, we never need to set foot in the Brighton ever again — Mediocre food I can forgive, but price gouging and bad management I cannot.

Leaving the restaurant stone-sober (but with lots of Vitamin C!), we headed over to the Kirwan for a pint and to check it out for future reference.

Apparently the nice weather brought out a lot of bad attitudes Sunday, but the greeter welcomed us warmly and the maitre d’ pointed out that the regular bar was upstairs if we were just there for drinks. We made our way through the crowds of brunchers upstairs to the bar. Very few seats at the bar (two seats had a coat and a scarf “saving” them, although they were never occupied while we were there), but there was a small high-top for two next to the bar. Not seeing any waitstaff around, I ordered two pints for us (I can’t resist a Magner’s) and my other half sat at the high-top.

As I’m paying the bartender for the round, a waitress went up to my other half with menus. When he explained we were just getting a drink, she very rudely and forcefully ordered him to get away from the table and stand at the bar for a drink. He politely agreed and was getting his bag and coat while the waitress repeatedly and rudely told him to leave the table. I come from a long-line of Irish folks from several counties, and I’ve never experienced such rude behavior in an Irish pub (or what claims to be an Irish pub).

With seat-savies shenanigans still happening at the bar, and apparently a “you can’t sit here” (Mean Girls reference) policy going on, we stood in the cramped bar area, drank our pints and left. While drinking, several waitstaff bumped and pushed by us like we didn’t exist and never bothered with an “excuse me” or “pardon” or any courtesy — they also could have gone around the empty tables we were standing near instead of through us. The only person to say “excuse me” was a member of the kitchen staff that came out with some plates. Oh, and at the little high-top table? Some older gentleman sat there, played with his phone and didn’t order anything. Wonder why the waitress didn’t bother kicking him out?

Overall, with the other recent stories I’m hearing from places at the Wharf, the whole enterprise is turning into a no-go zone for anyone but tourists with cash to burn. I certainly won’t be going back until they learn some hospitality.”