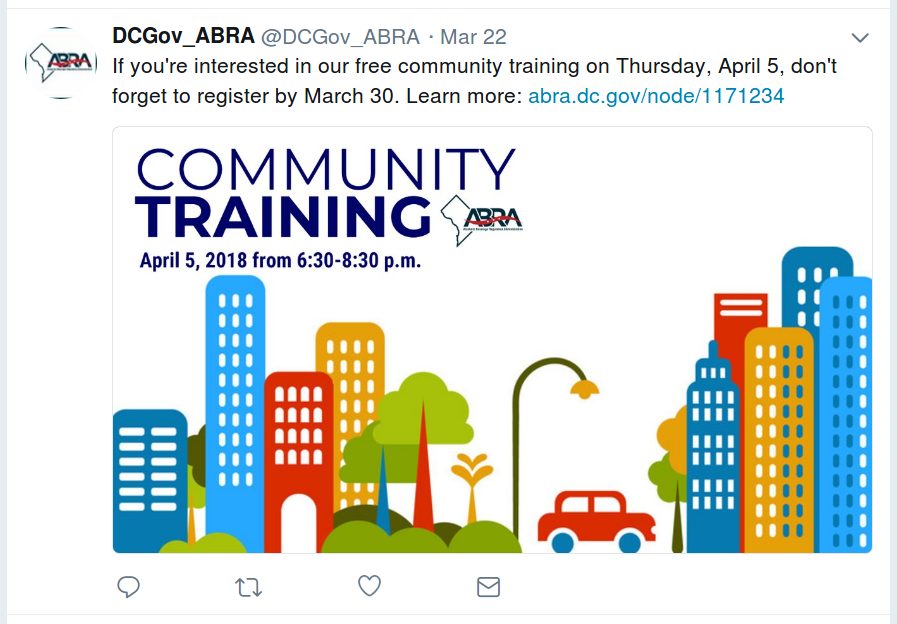 “This tweet says the deadline is March 30, but you should still be able to attend.”

If there is a liquor store near you that has been a bad neighbor, now is a great time to make your displeasure known. It is liquor license renewal season and tonight (April 5), the DC government is holding a free information session for people who want to know about procedure to protest a new or renewal liquor license.

Sarah Fashbaugh, Community Resource Officer at DC’s Alcoholic Beverage Regulation Administration (ABRA), appeared before Advisory Neighborhood Commission (ANC) 6E/Shaw on April 3 to remind about the renewal season and about the information session. Attendees at tonight’s session will learn about the relevant DC laws and the procedures to file an official protest, among other topics.

The training will take place at ABRA’s offices on the 4th floor of the Reeves Center (14th and U Streets NW) at 6:30pm. Learn more about the session here.

ABRA’s website says that the deadline to register for the session was March 30. However, at the ANC meeting on Tuesday (that is, after the deadline), Fashbaugh was still inviting people to attend. Interested parties may wish to call ABRA at 202-397-3971 or email Fashbaugh at [email protected] to make certain enrollment is still open.

DC liquor licenses are normally issued for three years to established businesses of all categories. Every year in the spring, a different category of liquor license is up for renewal. In 2018, it’s “Class A” licenses, the overwhelming majority of which are for retail liquor stores. (Establishments that sell wine and beer only for off-premises consumption are a different category, which is not up for renewal this year.)

Fashbaugh reminded the ANC that the protest period for Class A licenses was now open. The deadlines for filing a protest are staggered. In a few isolated cases, the deadline to protest has already past, according to renewal notices issued by ABRA. In most cases, however, the deadline to file a protest is between April 17 and May 21. For people who wish to protest a license, immediate action would be advisable if ANC support for the protest is sought. Many ANCs want to consider the matter first in a committee, and after that at a regularly-scheduled and publicly-noted monthly meeting, all before the protest deadline.

Fashbaugh also mentioned ABRA’s enforcement hotline number, which should be in operation any time a liquor-serving establishment is open legally in DC. The number is 202-329-6347.