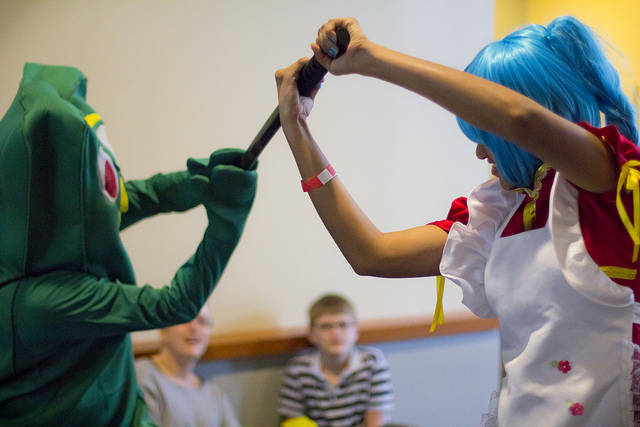 “Guests at the sixth annual Awesome Con by LeftField Media, the Mid-Atlantic’s premier pop culture convention, can expand their minds and whet their appetites with exciting culinary-centric programming at the con from March 30-April 1. Attendees can now visit www.awesomecon.com/programming to view the full Awesome Con schedule and plan their experience before heading to the Walter E. Washington Convention Center for the show. Awesome Con is also proud to partner with Maryland brewery Manor Hill Brewery for the second year to debut “Robo Fuel,” a limited-release pale wheat ale brewed exclusively for the con and available to purchase at regional restaurants and retail stores starting Friday, March 23 while supplies last.

Basil, Whisky, and the Pursuit of Space Gastronomy

Learn how researchers are working to master space cuisine, leading to the creation of space-distilled whisky, cheese fermented in microgravity, and the development of a hydrofuge, which can grow basil plants in an environment with no up or down.

The Future of Beer

Join Smithsonian’s Beer Historian Theresa McCulla and Beer Writer Franz Lind, as well as Manor Hill Brewing’s Head Brewer Kurt Krol for a discussion exploring the radical changes occurring in the world of beer over the past few years. The past, present, and – of course – the untapped future of beer are all on the table during this dynamic panel.

“Manor Hill is incredibly excited to be working with Awesome Con for a second time!” shares Jason Gotcher, Manor Hill’s Director of Brewery Operations. “We are all huge nerds at the brewery, so having the opportunity to work with such an amazing event as Awesome Con is really fun for us.”

Both beer aficionados and conventiongoers will note Robo Fuel’s fruity flavor profile balanced with a citrus tang and sweetened with boysenberry, soursop and tangerine. The addition of Citra and Azacca hops offers an approachable profile, perfect for warming spring weather.

For more information about Awesome Con and to get tickets, visit www.awesomecon.com. For the latest news and updates, follow Awesome Con on Facebook at www.facebook.com/AwesomeConDC.”