Get our email!
Search
bus 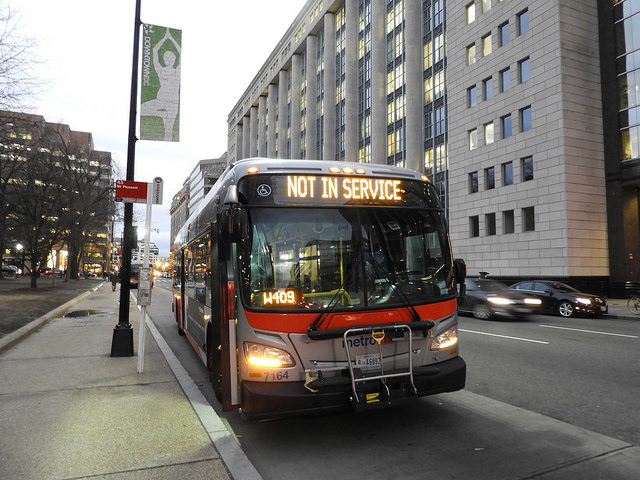 “Metro has temporarily removed from service 164 buses – representing approximately 10 percent of its fleet – following two incidents in which the engines cut off at low speed.

The most recent incident occurred today and was linked to a similar incident that occurred Thursday. In both incidents, the buses were traveling at less than 10 miles per hour when the engines cut off with no apparent warning.. Two minor injuries were reported as a result of the brakes engaging as designed.

“We are taking this action, putting safety first, until we fully understand what caused these engines to cut off unexpectedly,” said Metro’s Chief Safety Officer Pat Lavin. “While we understand there may be some customer inconvenience as a result of this action, safety must trump service.”

The 164 buses were manufactured by New Flyer in 2015 and 2016. The buses are all 40-foot compressed natural gas models that operate out of Metro’s Bladensburg Bus Division in Northeast DC and Four Mile Bus Division in Arlington.

The buses remain under manufacturer warranty, and New Flyer is sending a team of experts to participate in the investigation. The buses will remain out of service until the cause of the engine problem is determined.

Metro is deploying its fleet of approximately 80 “reserve” buses to help offset the out-of-service New Flyer fleet. However, the reserve buses will not fully replace the entire 164-vehicle New Flyer fleet, and bus customers may notice some slightly longer wait times between buses. Any significant delays in service will be communicated to customers via MetroAlerts email and text messages. Metro’s Rush Hour Promise will not apply to bus delays resulting from the safety checks.”