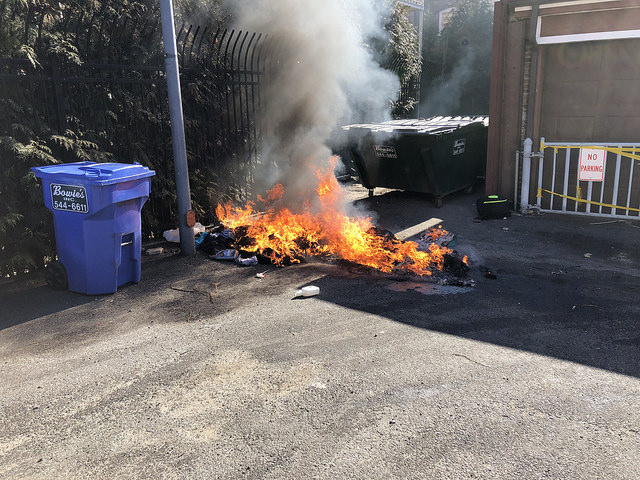 “We park our car in the alley on the south side of the 1300 block of Fairmont. When we left to run some errands around 9:00 am Saturday morning, there was a bunch of men’s clothes dumped in a pile at the end of the alley. When we returned around noon, the pile of clothes was on fire.

I called 9-1-1 but Engine 4 was already on it way. I back out and went to take some pictures. It was a little higher when I first saw it, but the attached picture show the gist. Engine 4 had a little trouble getting into the alley but the firefighters dragged the hose and put out the fire without incident.

In chatting with the three firefighters, we all had the same theory for why a pile of men’s clothes would be dumped in an alley and set alight. I’m just glad the (I assume) scorned woman waited until my car wasn’t in it customary spot, which is just three yards away. My neighbor says she saw a woman from the Alden (which we already call 90210) lurking earlier but there’s no way to be sure.”

Next
This is Gonna Be Interesting