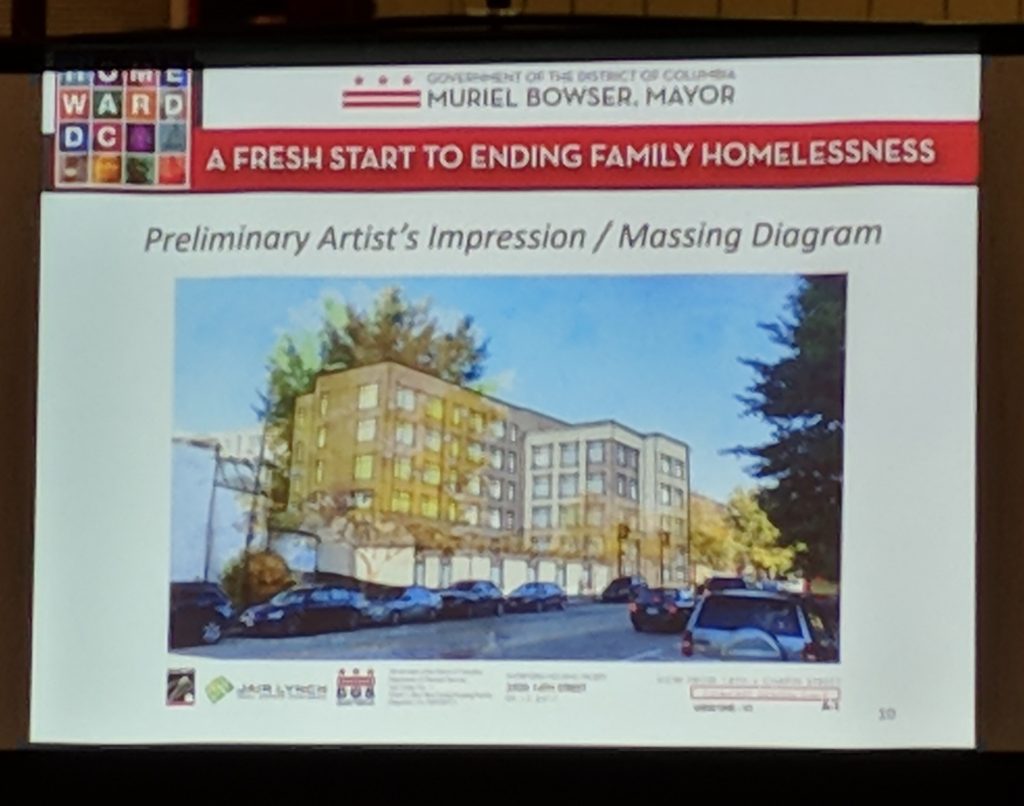 [CORRECTION January 21, 2018 by David McAuley: In the original version of this story, I reported in error that ANC1B distributed a proposed draft resolution at the meeting calling on the DC government to “revise the location of the new Ward 1 shelter site”. The document is not a draft. It is a resolution which was passed by ANC1B at its December meeting. I further reported that the draft resolution might voted on at the ANC’s February meeting. At this time, the ANC has no plans to vote on this, or any other, resolution at February. Please see last paragraph for complete correction. Apologies for the error.]

“We’re having a conversation about something that’s already done,” one Columbia Heights resident said. “You all have already decided without community input.”

The resident expressed the opinion of many who attended the Ward One Community Town Hall Meeting at Rita Bright Family and Youth Center (2500 14th Street NW) last night (January 18). The resident’s anger was directed at the December 7, 2017 announcement by Mayor Bowser to construct a 50-unit “family homeless shelter” on the site of the community center. More than 200 local residents filled the gymnasium and made so much noise during the post-presentation question-and-answer session that the presenters had to threaten to end the meeting prematurely.

However, the residents first sat quietly while Ward One Citycouncilmember Brianne Nadeau spoke briefly, and then Kristy Greenwalt, Director of DC’s Interagency Council on Homelessness, and Brian Butler, project manager from the DC Department of General Services, made a presentation about the proposed construction. Many of the details seemed unchanged from last month’s announcement: for example, there are 35 planned short-term family housing units and 15 senior permanent supportive housing units. The presenters showed slides portraying the general massing of the proposed project, but emphasized the slide did not represent the final design, which had not been decided.

The presenters also promised that the Rita Bright Center would remain on the site and be fully renovated as part of the project. Butler said that, although “the goal and aim is to keep this site open” during the entire construction process, DC “may have to shut some parts for upgrades”. In response to later questions, Butler clarified that the plan might be to shut down one part of the center for renovations while allowing another part to remain functioning.
The 200+ attendees became unruly during the post-presentation question-and-answer session. Although a man with a microphone went from person to person who wished to ask a question or express an opinion, it was often difficult to hear them over the angry shouts from the crowd.

Among the objections were:

– The announcement, and the emergency legislation supporting it, was sprung on the community stakeholders without warning and consultation. Therefore, the town meeting was pointless since “the deal is done”, in the words of one local man.

– DC’s track record on maintaining the Rita Bright Center did not inspire confidence. Many people mentioned a poorly-functioning heating and air conditioning system, and the number of broken computers in the center’s lab.

– If the project went forward as planned, mentally-ill homeless people might present a danger to local children who used the center.

Members of the crowd also shouted demands that the presenters take the homeless into their own homes or take over one of the many new condominium buildings in the area to house the homeless.
At one point, an angry local resident screamed at Councilmember Nadeau so loudly that Nadeau had to step outside with the resident so the meeting could continue.

At its December 2017 meeting, Advisory Neighborhood Commission (ANC) 1B approved a resolution which calls on DC to “revise the location of the new Ward 1 shelter site”. The ANC’s next regularly-scheduled meeting on Thursday, February 1, at 6:30pm, at the DC Housing Finance Agency (815 Florida Avenue). There are no resolutions connected with the matter on the ANC agenda as of now, but there may a short report on new developments, if any. Further discussions may take place during meetings of ANC1B’s Economic Development Committee and future town-halls or forums.

Read more →
More Stories
Today’s Rental is “Looking to fill one bedroom (with its own bath) in a 2 bedroom, 2 bathroom Adams Morgan”Your Afternoon Animal Fix – AdoPtville