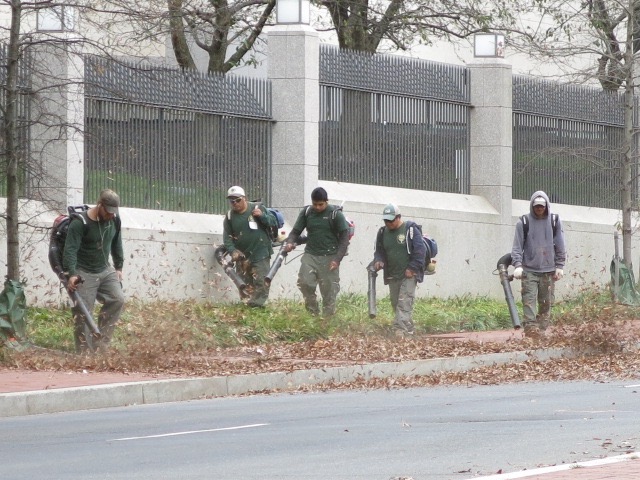 At its regularly-schedule meeting December 11, Advisory Neighborhood Commission (ANC) 6D/Waterfront voted to support a ban on the sale and operation of gas-powered leaf blowers in the District. The vote was unanimous with one abstention.

As reported on PoPville, the bill would outlaw the sale and use of gasoline-powered leaf blowers in the District after January 1, 2022. It was proposed by DC Councilmember Mary Cheh (Ward 3) and championed by advocacy group Quiet Clean DC.

Cheh first proposed the bill in 2016.

This year, the bill has four additional co-sponsors on the Council, but has been under consideration by the Council’s Committee of the Whole since April. See the text of the proposed law (.pdf download) here.

ANC6D Commissioner Gail Fast (district 01) introduced a resolution supporting the ban. She emphasized that the bill was not primarily about noise. It was about emissions. Gasoline-powered leaf blowers are powered by inefficient two-stroke engines which release toxins into the air at a rate 93 times greater than that of the average sedan. By comparison, battery-powered leaf blowers are much easier on the environment.

In addition, Fast said leaf blowers kick up disease-causing microparticles into the atmosphere, which might include – when you are cleaning the District’s parks and streets – remnants of dog feces and decayed parts of rats.

Fast also said that other ANCs have already signed on to support the proposed law. A resolution on this matter is on the agenda for the meeting of tonight (December 13) of ANC 2B/Dupont.

Read more →
More Stories
Today’s Rental is “A Deal of Lifetime!”What in the Holy Hell?