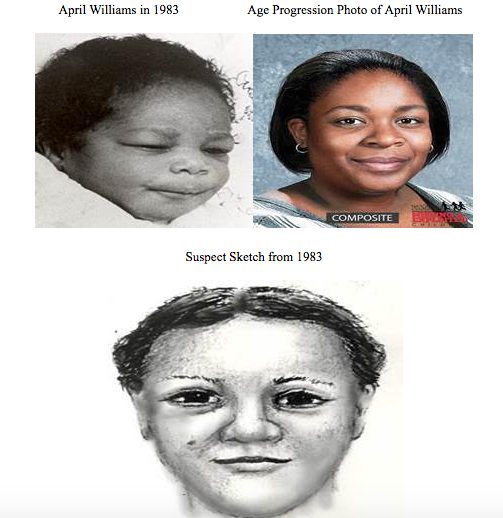 “The Metropolitan Police Department Criminal Investigations Division seeks the public’s assistance in reference to a Cold Case Kidnapping offense that occurred on December 2, 1983, at the bus station, in the 1200 block of New York Avenue, Northwest, Washington, DC.

On Friday, December 2, 1983, an infant, who was three months old at the time of the offense, was kidnapped from her mother who was in transit at the bus station in the 1200 block of New York Avenue, Northwest.

The suspect in this case identified herself as Latoya, but could also go by Rene or Rene Latoya.

Additionally, the following is a possible description of the suspect:

The infant victim was named April Williams. She has a small birthmark on top of her left wrist in a straight line. She can be seen in the photos above.

Anyone who has information regarding this case should call law enforcement at 202-727-9099. Additionally, information can be submitted through the TEXT TIP LINE by text messaging 50411.”