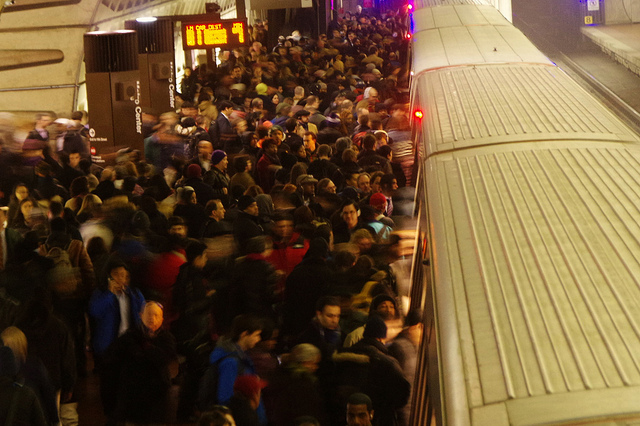 “Metro has identified communications cable along a segment of the Red Line that is in need of replacement. The cable, approximately 40 years old dating back to the original construction of the Metrorail system, is used by the signal system to transmit train speed and location data between control rooms located at Brookland, Fort Totten and Takoma.

“We have detected a condition that, left unaddressed, could affect the integrity of the signal system, and that is something we take very seriously,” said Joseph Leader, Metro’s Chief Operating Officer. “Safety demands that the cable be taken out of service and replaced.”

To mitigate any safety concern due to the condition of the cable, Metro is limiting the number of Red Line trains between certain stations. Only one train at a time is permitted on each track between Brookland and Fort Totten and one train on each track between Fort Totten and Takoma. These restrictions reduce the capacity of the Red Line, resulting in congestion and delays.

Metro is acting quickly to resolve the cable issue and is now planning to replace trains with buses along a section of the line this weekend to install new cable. Previously announced Red Line weekend single tracking between Farragut North and Judiciary Square has been cancelled. Instead, free shuttle buses will replace trains all weekend between Silver Spring and Rhode Island Avenue stations. Customers can use the Green Line between Fort Totten and Gallery Place as an alternate route.

Starting tomorrow, Metro will slightly modify Red Line service to reduce delays until new cables are installed. During rush hours, trains between Shady Grove and Glenmont will run every 10 minutes, rather than every 8 minutes. Additional trains will run between Grosvenor and NoMa-Gallaudet, resulting in service about every 5 minutes between those stations, rather than every 4 minutes.

If the cable installation this weekend goes as planned, normal Red Line service may be restored as soon as Monday, December 18.

The cable issue is not related to recent construction activity between Silver Spring and Fort Totten, which involved the installation of a new interlocking where trains can cross from one track to the other.”