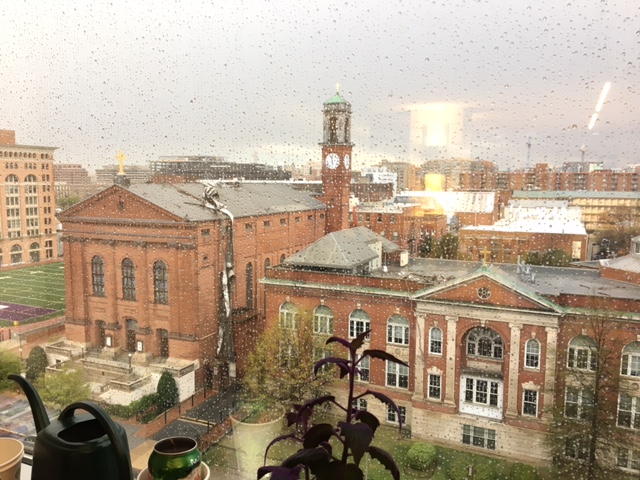 Gonzaga College High School (19 Eye Street NW) will ask DC liquor licensing authorities for a tavern license. However, teachers there should not start looking forward to a day when the faculty room has a mixologist to help take the edge off.

Stephen Neill, Gonzaga’s “Senior Vice-President for Advancement”, along with an attorney, appeared at the December 5 meeting of Advisory Neighborhood Commission (ANC) 6E/Shaw to reassure that the school was not going to become a tavern.

Right now, the school has three fundraising events per year where alcohol is sold. These alumni events have been going on for 122 years, the ANC heard. Current practice is to get a separate one-day license whenever a fundraising event takes place. One-day DC liquor licenses are issued in the name of individual employees of the school. There are potential liability issues. A tavern license, by comparison, would be issued in the name of leadership of the school.

Solving this liability issue will cost the school. It is seeking a license with an entertainment endorsement that will allow it to serve up to 800 people. A class CT-03 tavern license (which allows service to 200 or more) costs $3120. An entertainment endorsement would cost an additional 20 percent, for a total of $3744. The license would be valid until September 30, 2019, when all tavern licenses come up for renewal, no matter when they were obtained.

By comparison, a one-day license for a full-service bar costs $300, plus an extra 20 percent for the entertainment endorsement. If the school held six events before September 30, 2019, the cost would be $2160.

At the meeting, Neill and the attorney assured the ANC that alcohol would only be available to those over 21 and the license would stipulate 1am closing.

After a short discussion, ANC6E voted to endorse the tavern license application of Gonzaga College High School by a vote of 4 to 1.