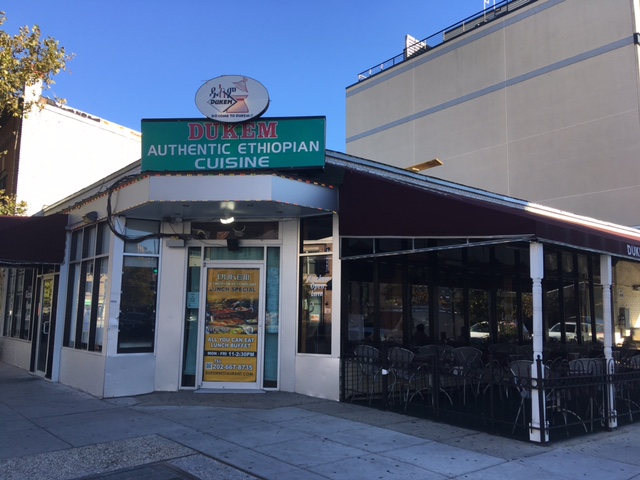 “I am shocked that there is no one here from the community,” said committee chair Patrick Nelson.

Dukem Ethiopian Restaurant, like many DC restaurants, has a settlement agreement with the ANC and perhaps other parties. These settlement agreements can cover a wide variety of topics, but often they deal with matters like hours of operation and trash disposal.

There are “a lot of issues about non-compliance with the settlement agreement”, it was reported. Neighbors are complaining about trash and parking, among other issues.

Strictly speaking, hearings about the exterior appearance of a restaurant are not the appropriate venue to complain about a restaurant’s operation. However, it is not unusual for neighbors to take any opportunity to make their displeasure known. Hence the surprise at the lack of turnout at the meeting.

To build the second story, the restaurant must obtain the blessing of DC’s Historic Preservation Review Board (HPRB), which monitors and controls the exterior appearance of buildings in historic districts. Dukem is located in theU Street Historic District. However, the building is classified as “non-contributing” within the district. This means the building has no particular features that are deemed important and are of historical significance, so it will be somewhat easier to get permission to modify it.

The “architect of record” (who did not say her name) told the committee that the owner of the restaurant was out of the country. She then gave a presentation on the planned addition. The planned second floor will be set back from the street. There will be some exterior seating, but most of the second story dining area will be enclosed by a setback metal and glass structure.

Dukem Restaurant shares a common wall with a neighboring mixed-use residential building on U Street. The architect said that, to create a “sound barrier” between the restaurant and its residential neighbors, the side of the proposed second floor closest to the neighbors will be mostly storage rooms and toilets, and not rooms where diners will sit and eat.

The proposed addition does not require any zoning relief, so, if Dukem receives HPRB approval, it can go ahead with the planned addition.

The matter now moves on to the full ANC for consideration at its next scheduled meeting, December 7, at 6:30 p.m., at the DC Housing Finance Agency (815 Florida Avenue NW).