“Founder and co-owner Jonathan Nelms announces plans to open D.C.’s first Georgian restaurant, Supra, coming this fall to Washington’s Shaw neighborhood at 1205 11th Street, NW. The kitchen will be helmed by Chef Malkhaz Maisashvili, who brings over 25 years’ experience preparing Georgian cuisine and is the former Chef of the Embassy of Georgia in Washington. Taking its name from the Georgian word for a traditional celebratory feast, Supra will open later this fall with lunch, brunch, and dinner service.

Supra’s menu will highlight the diverse, richly flavorful cuisine, which features many vegetable-forward small plates as well as fresh meats, breads, and cheeses. Broadly reminiscent of Mediterranean and Middle Eastern cuisines, Georgia’s kitchens have been influenced over the centuries by many cultures due to its location at the confluence of many empires (from the Ancient Greeks to the nations along the old Silk Road), while retaining to this day a uniquely Georgian core.

Focusing on Georgia’s distinct regional specialties, Supra will showcase signature Georgian dishes such as the simple — but unforgettable — cheese-stuffed khachapuri breads, a walnut-sauced chicken called satsivi, and pkhali, a vegetable pâté. Fresh herbs will be prominent throughout the menu, and guests can expect to see frequently used Georgian ingredients like pomegranates and walnuts in many dishes, from salads to soups to mains and desserts.

Jonathan tapped Chef Malkhaz to lead the kitchen after two successful tasting dinners including industry experts, Georgian food enthusiasts, and neighbors completely new to the cuisine. In fact, Jonathan and Malkhaz unknowingly connected years before. While celebrating their fifth wedding anniversary back in 2011, Jonathan and his wife and Supra co-owner, Laura, dined at the Tbilisi restaurant In the Shadow of Metekhi, where Malkhaz was running the kitchen.

In addition to featuring Georgia’s best-known and favorite dishes, Chef Malkhaz will also adapt forgotten recipes he collected while visiting every region of Georgia for the TV show “Treasures of Georgian Cuisine.” Wanting guests to feel like every meal is a “supra,” Malkhaz and his team will highlight the diversity of the cuisine and capture both the ancient traditions and modern face of the Republic of Georgia.

Jonathan has long been fascinated with Georgia, beginning with a teenage friendship with a Soviet-Georgian exchange student, who inspired him to embark on his own exchange year in the Soviet Union through the American Field Service. It was during this time that he had his first exposure to Georgian food and wine, a cultural passion that he channeled into a legal career focused on high-risk business transactions in Russia, Georgia, Central Asia, and the rest of the former Soviet Union. A fluent Russian speaker, he frequently travels to the region and lived, together with Laura and their daughters, for three years in Moscow, where they observed the overwhelming popularity of Georgian restaurants among expats and locals alike.

Georgian wines and cocktails inspired by the flavors and liqueurs of the region will round out the menu. With a wine culture believed to be the world’s oldest, dating back some 8,000 years, Georgians are as proud of their wine as they are of their food, with the country’s viticultural exports growing in sophistication, refinement, and frequency on Western shelves. 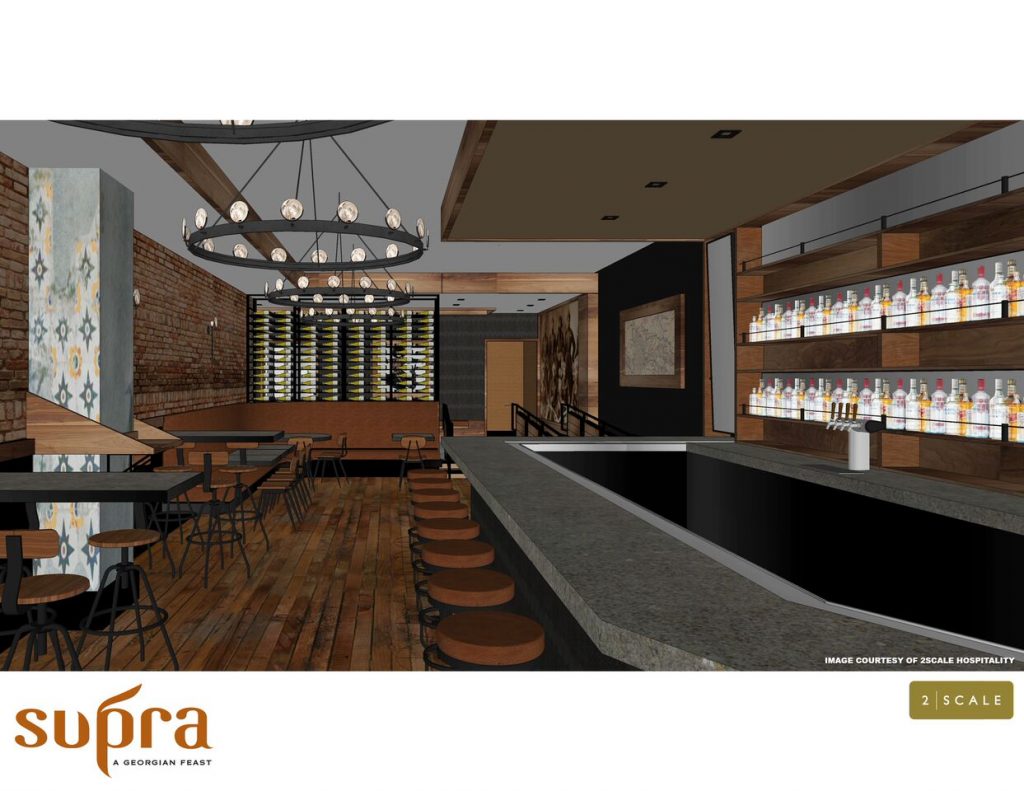 2Scale Interiors designed the space, with Virginia-based JSV Construction, the team behind the Russian-themed Mari Vanna in Dupont Circle, responsible for the build-out. The interior design focuses on Georgian art and culture, including displays of traditional Georgian hats and “supra” tablecloths, and art from Moscow, D.C., and Tbilisi-based artists, including a metalwork installation featuring the Georgian alphabet.

The restaurant will open serving dinner, rolling out lunch and weekend brunch services shortly thereafter. Final food and beverage menus, along with operating hours, reservations, and other information will be made available closer to opening.”