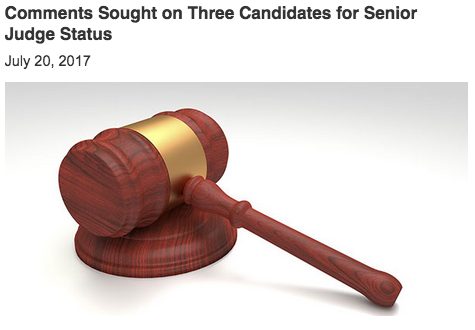 As a longtime DC resident, I’m constantly looking for ways to make the City a better place, and one easy way to do so is to voice my opinion when it matters.

One such opportunity is to chime in during appointments and promotions of D.C Superior Court Judges, the ones whose actions have a great impact on the quality of life for D.C’s residents.

Three of the Superior Court Judges are currently being proposed for Senior Judgeship and the public are encouraged to comment before September 29.

I personally had the misfortune of being the victim of a violent crime, only to realize that the perpetrator was a career felon who was given a minimal sentence by one of these 3 judges, not just in my case last year, but once before, by the same judge, almost 2 decades ago. I believe elevating these kind of judges not only condones this kind of behavior, but encourages it.

I did make my voice heard to the Office in charge of hearing the comments, and hope that other readers of PoPville would take the time to do so, in case they have an opinion one way or another, on any of the 3 judges.”

The D.C. Commission on Judicial Disabilities and Tenure is reviewing the qualifications and fitness of the following D.C. Superior Court Judges:

All comments must be received by Friday, September 29. The identity of any person submitting comments will be kept confidential, unless the commenter authorizes the disclosure of his or her name.

Contact the Commission’s Executive Director, Cathaee J. Hudgins for more information, or to request a hard copy of the survey, at 202-727-1363 or [email protected] (mail to [email protected]).