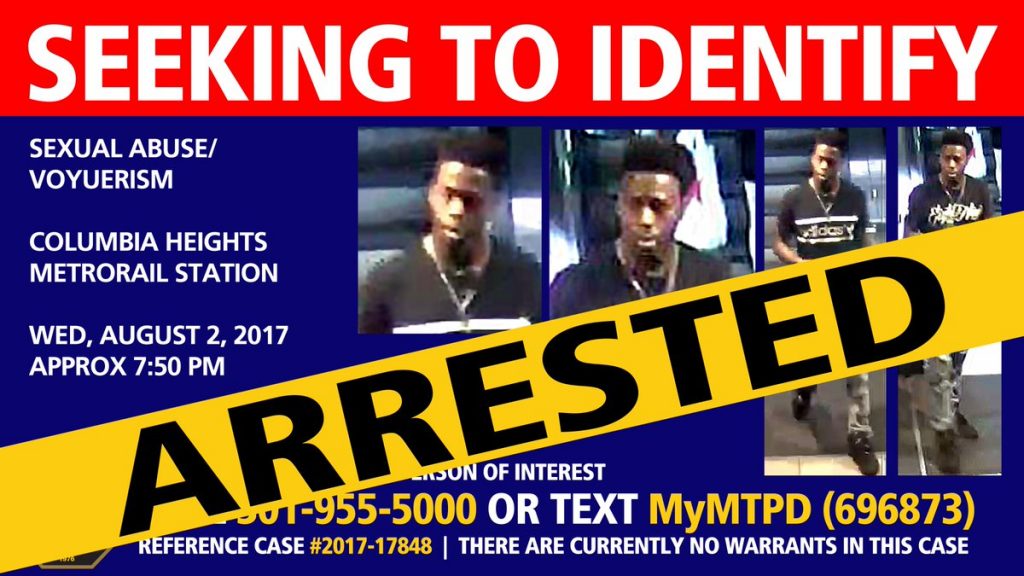 Last Thursday afternoon, the victim, an adult female, contacted Transit Police via Metro’s online harassment reporting system. The victim reported that she was exiting Columbia Heights Station Wednesday evening using the ascending escalator at approximately 7:50 p.m. when she felt a hand up her skirt. The victim immediately left the area, while the suspect returned into the station.

Detectives immediately contacted the victim to gather additional information and offer support. MTPD also deployed casual-clothes officers at Columbia Heights and other stations in an attempt to locate the suspect and other potential victims.

Using information provided by the victim, investigators were able to find the incident on video and obtain images of the suspect. The review of video footage revealed that the suspect placed a cell phone up the victim’s skirt.

On Friday morning, a “be on the lookout” notice (BOLO) was issued by MTPD. Based on an anonymous tip from the public, investigators quickly identified the suspect as Williams. Over the weekend, a search warrant was executed at a residence in Prince George’s County. Multiple electronic devices were seized by MTPD detectives, including cell phones, computers, and hard drives.

To date, multiple other victims have been identified and contacted by Metro Transit Police investigators. However, there are still potentially dozens of female victims who are unaware that Williams took “upskirt” photos of them while on an escalator. Several incidents known to investigators occurred at Columbia Heights Station Wednesday evening (August 2, 2017) on the ascending escalator located on the west side of 14th Street NW. The suspect is also believed to have been at the Columbia Heights and U Street Metrorail stations the following day, Thursday, August 3. All of the victims were females wearing skirts.

MTPD detectives are interested in speaking with anyone who believes they may be a victim in this matter. To reach the MTPD Criminal Investigations Division, call 301-955-5000, text “MyMTPD” (696873), or use Metro’s online harassment portal at wmata.com/harassment.

The investigation into this case remains active, and additional charges are likely.”