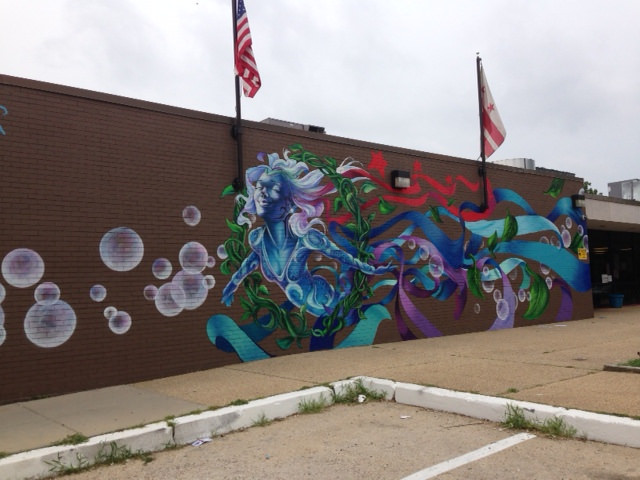 “On Sunday, August 13, there was an unfortunate incident at the Rumsey Aquatic Center at Eastern Market. While at no point was the safety of our guests at risk, the incident did involve an individual being asked to leave the facility due to offensive language and inappropriate behavior.

At approximately 2:45 p.m., an individual entered the facility and proceeded to the pool deck, where he sat down and began charging his electronic device. The individual had visible drawings on his body of swastikas, upside down crosses, and “666.” Several guests raised concerns to DPR lifeguards about the individual being on the pool deck, but not using the pool. A DPR lifeguard responded by trying to speak with the individual. At this point, the individual became irate, repeatedly and aggressively using offensive language towards the lifeguard. As the situation began to escalate, a second lifeguard intervened, and the police were called. Once officers from the Protective Services Division arrived, the individual was escorted out of the facility. The pool remained closed for about 30 minutes after the incident while staff cleaned up glass from a door window that was accidentally broken while the second lifeguard was assisting with deescalating the situation. To be clear, there was no physical contact between the individual who was asked to leave and any staff or guests at the facility.

Going forward, we will continue to stand by and promote our DC values of inclusivity and diversity. DPR’s mission is to provide universal access to parks and recreation services. We want to reassure our guests that while the agency does not deny access to programs or facilities based on personal appearance, we do require that all guests and employees treat one another with respect. DPR thanks the members of the community who offered our lifeguards support during and after this disturbing incident.”

I’ve gotten many disturbing messages passed on today about an awful incident at the Rumsey Pool over the weekend. I’ve emailed DPR for comment and am waiting on a response.

Readers share from various listservs including Mothers on the Hill:

“I just stopped by my local pool in Eastern Market to swim laps. It is temporarily closed because a guy with a swastika tattoo on his abdomen entered the pool today and called a lifeguard the N word, and a brawl ensued. The other swimmers I spoke to said there was blood and they broke the glass at the lifeguard stand. I saw the white supremacist with the swastika tattoo sitting on the sidewalk in front of the pool being interviewed by three DC police with my own eyes.”

“I have spoken with leadership at both the Department of Parks and Recreation and the Metropolitan Police Department. As I understand it, an individual came to a public pool in Ward 6 and displayed on his person a symbol of hatred and bigotry. When asked to leave by staff, he started using hateful and derogatory language toward the staff and was then escorted from the building by Protective Services.

The symbols and language of hate have no place in our community. When the President of the United States lacks the courage to openly denounce hatred, it falls to each of us to do so. I call on all of us to speak up and reject symbols of hatred and bigotry wherever and whenever they appear. We cannot allow these symbols, these words, and these acts to become normalized.”