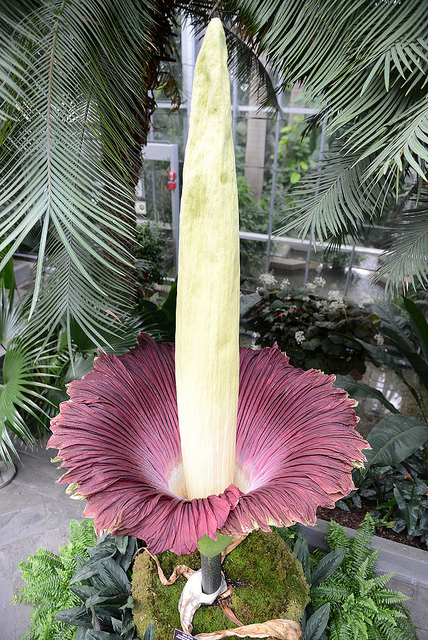 From the U.S. Botanic Garden:

“For the first time in the history of the U.S. Botanic Garden (USBG), three corpse flowers (Amorphophallus titanum) are about to bloom at the USBG Conservatory. The plants went on display Tuesday, August 8. One of the plants is the first corpse flower to bloom that the USBG staff has grown from seed. The Garden currently estimates peak bloom might happen between August 17th and 22nd. Once fully open, each bloom usually remains open for 24 to 48 hours and then quickly collapses. You can track the blooms’ progress via live video at http://www.USBG.gov/CorpseFlower. This appears to be the first time that a garden in North America has three corpse flowers blooming at the same time.

The corpse flower, also called “the stinky plant,” is famous for its large size, pungent odor, and unpredictable bloom schedule. The bloom is the largest unbranched inflorescence in the world – reaching up to 12 feet tall in the wild. An inflorescence is a cluster of multiple flowers that in the case of Amorphophallus species looks like a single flower. The corpse flower has hundreds of flowers located at the base of the spadix (the large vertical center) inside the famous purple-maroon spathe (the part that looks similar to “petals”).

The corpse flower gets its name from the putrid scent it emits while in bloom to attract pollinators such as carrion beetles and flies. Some describe the scent as a combination of garlic, fish, diapers, and rotting meat.

The plant, first known to science in 1878, is native to tropical rainforests of Indonesia. Since such a large bloom requires lots of energy, it can take several years to several decades to store enough energy to bloom. Public displays of this unique plant have occurred a limited number of times in the United States. The U.S. Botanic Garden has displayed several blooming corpse flowers, the most recent of which bloomed last year.

The U.S. Botanic Garden is open to the public, free of charge, every day of the year from 10 a.m. to 5 p.m. On August 17-21, the Conservatory will stay open until 7 p.m. while the corpse flower is on display, and will stay open until 10 p.m. during peak bloom days. The Conservatory is located at 100 Maryland Ave. SW, on the southwest side of the U.S. Capitol. Visitors are encouraged to use Metrobus and Metrorail. Visit http://www.USBG.gov/CorpseFlower for updates on peak bloom timing and extended hours, to learn more about the plant, and to see a live video stream.”

Next
Today’s Rental is a “True one-bedroom”