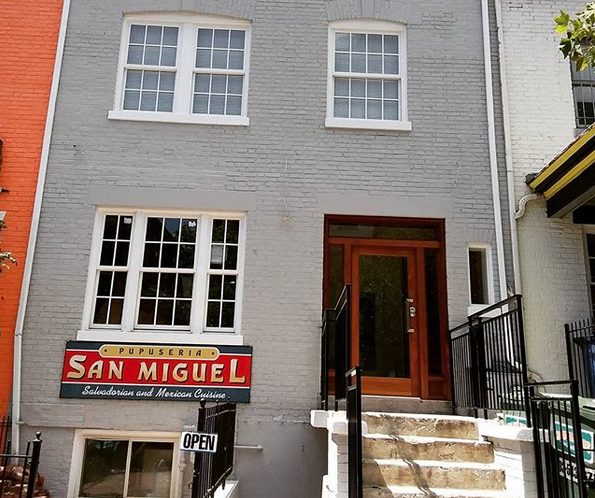 Thanks to Andy for passing on this epic news from Mount Desert Island Ice Cream:

“We are excited to announce that we are opening in Washington D.C. this fall! This is the site of our future location in Mount Pleasant, added bonus, a great Pupuseria downstairs! We are currently under construction so we will keep you posted as we get closer to opening.”

We are excited to announce that we are opening in Washington D.C. this fall! This is the site of our future location in Mount Pleasant, added bonus, a great Pupuseria downstairs! We are currently under construction so we will keep you posted as we get closer to opening.

“I guess the story begins when, of all things, I was working for a software company in Boston as a web and multimedia developer. One day I knew it was time for a change. I wanted to work for myself, make my own rules, decide my own hours (BTW, this is a myth all all small business owners tell themselves at first: that they are going to “make their own hours.”)

From a young age, I always recognized two constants: this desire to work for myself, and the recognition that the only dessert that ever mattered was ice cream. With that in mind, Mount Desert Island Ice Cream was born in 2005 with not much of a vision except to make my favorite dessert the best way I knew how.

That first year my goal was to fill a void by making flavors not seen in ice cream shops or on the shelves at the supermarket. This led to my first big obsession: making a Nutella flavor – it needed to be done! However, I also spent time trying to perfect the classics. When I started out you couldn’t easily find a chocolate ice cream in the supermarket that was actually made with real chocolate instead of cocoa powder. This is still often the case today.

At the time I had never heard the word “artisanal” applied to food as it wasn’t quite a movement yet. I wanted to make ice cream with real ingredients in small batches. Not out of nobility really, but because I didn’t know any other way. Over a decade later, and we still make it the same way, 5 gallons at a time.

As I worked to hone my craft that very first year, I kept everything simple, selling small quantities at local farmer’s markets and and to various restaurants. By 2006, I decided to make the big jump and we opened our first retail location at 7 Firefly Lane in Bar Harbor. Honestly, I didn’t ever think I wanted a shop, particularly as I had never worked in the retail environment, and I had no idea what I was doing (really, I mean zero idea). That inaugural year was one challenge after another. When you are starting out a new business from scratch, there is never a moment when you are not “on”, coming in to fix something, cashing out the register, dropping off change, filling in shifts, painting the floors at night, defrosting the cabinets… Oh yeah, and also making ice cream seven days a week.

It all worked out though (a good case for taking the leap as usually things turn out in the end!)

The following year I opened a second shop nearby at 325 Main Street on the outskirts of town in Bar Harbor. I needed a bigger production space and help with prep. My plans was that this second space would be a slow, quiet shop where the employees would work on prep while also serving a few flavors to customers. It would also be a place where chefs could pop by for tastings and discuss ideas. Much to my surprise, the shop became a very busy little spot not long after it was opened.

And then Obama happened.

While on their vacation trip to MDI in 2010, President Obama and family visited our Main Street shop. He had Toasted Coconut and Michelle had Chocolate (though confidentially they were a bit more adventurous in the flavors they tasted when the press wasn’t around). Their visit was an amazing experience, and best left as a story for another day. However, all of a sudden our quiet little second shop became overwhelmed with visitors who wanted to have ice cream where the first family had visited!

That same year I made the leap south, expanding to Portland. A fantastic spot at 51 Exchange Street opened up that was just calling out for an ice cream shop. While Bar Harbor will always be our home, we also love being involved in the exciting Portland food community. After years of going back and forth the three plus hour drive seems like nothing these days.

It’s been over a decade since I decided to dump the corporate job and start out on my own. And though we like to experiment with flavors, I still keep firmly to the same original principles I started with. I have decided that I’m not satisfied having a company that just sells a widget, analyzes the bottom line, then makes decisions from that standpoint. I want my company to be much more than that.

MDIIC tries to be as environmentally conscious as possible by using responsible ingredients, responsible packaging and recycling just about everything we can. We buy from local sources as much as possible, and have through the years been part of some ambitious (though not always successful) attempts to support local farmers. When it comes to my shops, I have continued to try to create as many good jobs as possible, pay as well as I can, foster a fun environment to work in, and, most importantly, just try to be as decent of an owner and a person as I can be.

And, in the end, I still just want to make some great ice cream.

Living the dream. Making the cream.”

more stories
Previous
Random Reader Rant and/or Revel
Next
Resisting Robbery Leads to Man Shot near Catholic University at 10:05pm; Also at 9:30pm “a vehicle was traveling Eastbound on I-695 near the 11th Street SE exit fired multiple shots at the victims”