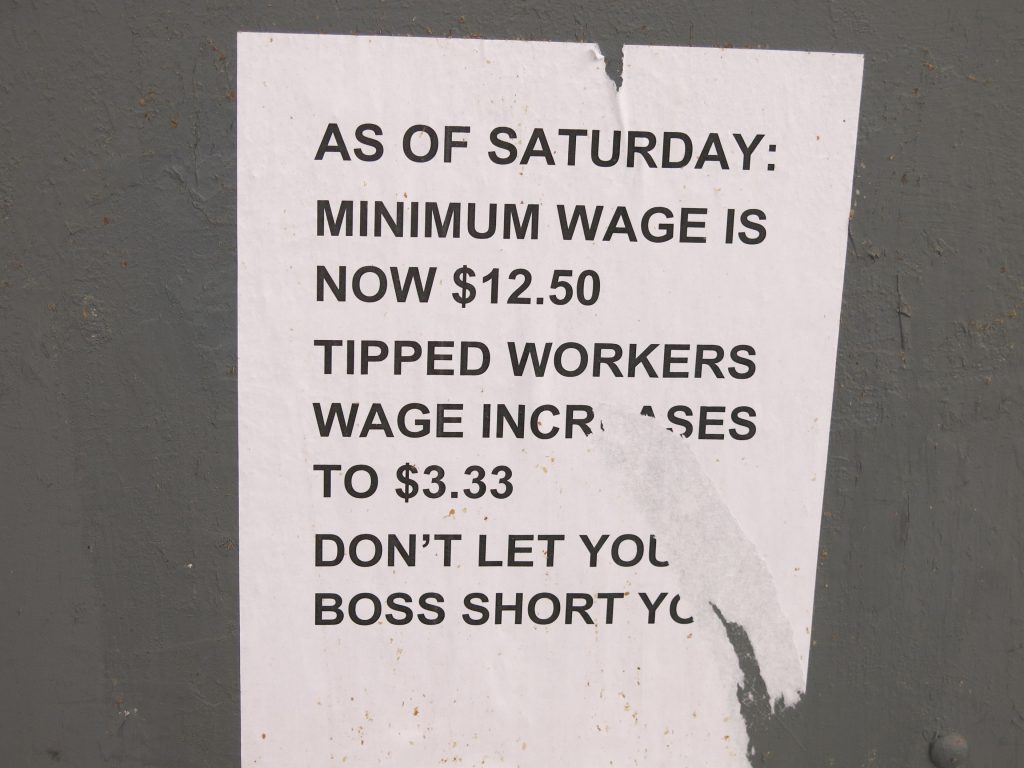 I spotted this note on U Street

“In a city as prosperous as ours, we must pay our residents a fair wage,” said Mayor Bowser. “In Washington, DC, low wages prevent working families from getting their fair shot, which is why we fought to increase DC’s minimum wage to $15 by 2020. This increase will put more money in the pockets of working families, and put more people on pathways to the middle class.”

In the Mayor’s 2016 State of the District Address, she promised to send legislation to the DC Council to increase DC’s minimum wage to $15 per hour by 2020. On June 21, 2016, the DC Council voted unanimously to pass the Fair Shot Minimum Wage Amendment Act of 2016. This week’s increase marks the first time the minimum wage has gone up under the Mayor’s legislation. Under the law, the minimum wage will increase to $15.00 per hour by 2020, and will increase each successive year beginning in 2021 in proportion to the increase in the Consumer Price Index.

“The Mayor has set an example for the nation to follow by pushing one of the nation’s highest minimum wages to help dig men and women out of poverty,” said 32BJ SEIU Vice President Jaime Contreras. “The difference that $15 an hour can make for so many struggling families cannot be underestimated.”

“We applaud Mayor Bowser’s leadership in increasing wages for District workers. Now more than ever, we need to ensure our workers and their families have access to high wages and good paying jobs as the city continues to grow and prosper,” said Metropolitan Washington Council AFL-CIO Executive Director Carlos Jimenez.

“Raising the minimum wage for thousands of working families is the right thing to do. We stand with Mayor Bowser as she fights for fair wages for DC workers and their families. DC is a national leader in our continued fight for $15 for all low-wage workers,” said United Food and Commercial Workers Union Local 400 President Mark Federici.

“Tomorrow’s increase is another step in the direction of a $15 per hour minimum wage and our ultimate goal of a living wage. We believe that more money in the pockets of the working families of the District of Columbia increases their ability to live a more full and complete life,” said Working Families Senior Adviser Valerie Ervin.

The District of Columbia Minimum Wage Poster can be found at does.dc.gov.”