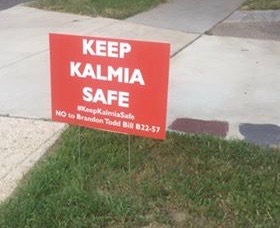 I keep seeing signs in Kalmia stating “keep kalmia safe” oppose Brandon todd’s bill DC22-57. Do you know what bill that is?”

Thanks to Liz for sending from Change.org:

“We write to you, our elected officials, as residents of Washington, DC who are deeply concerned about public health and safety risks due to increased traffic from Jemal’s Gateway DC near the intersection of Kalmia Road, Georgia Avenue, Alaska Avenue and Eastern Avenue, also known as the “Georgia Eastern” project, as currently proposed.

Bill B22-00057 seeks to close a public alley to help facilitate the Georgia Eastern project. If the project is built as currently proposed, we believe it will pose a public health and safety risk that is not acceptable to the neighborhood of Shepherd Park.

The developer estimates an increase of up to 351 cars/hour at peak hours on Kalmia Road NW. As residents of Kalmia Road and the surrounding streets, we know such an increase is just not physically feasible without a dangerously high safety risk imposed on residents.

Initially, the proposed entry to the Georgia Eastern garage was on Eastern Avenue, a much wider street than Kalmia Road, and many in the community supported the project. Something changed between the proposal many in the community saw and what was ultimately approved by the DC Zoning Commission. Instead of all retail and residential traffic entering and exiting on Eastern Avenue, it enters and exits on Kalmia Road.

Most concerning, there will be an ADDITIONAL 351 cars an hour entering and exiting the project driveway on Kalmia. That is 351 MORE than current traffic.
We note that the traffic estimate is likely low, given that increased traffic from surrounding neighborhood projects a few block away was not incorporated.
Residents of Kalmia Road and the surrounding streets have witnessed too many car accidents, clipped rear view mirrors, or sideswipes by drivers who mistakenly thought the street was wider than it is.
The real possibility of traffic stacking and gridlock was discussed at Bill B22-00057’s public hearing with no clear solution offered. We know there is no way Kalmia Road can handle gridlock and two way traffic safely.
As a result of the traffic estimate, community support for the project has fallen.

Countless children walk along Kalmia Road daily to access the two schools just blocks away from the project, as do many pedestrians on their way to the many local houses of worship.

Closing the ally to facilitate the Georgia Eastern project poses an unmanageable public health and safety risk to ourselves, our children and the community that we can not abide.

We urge you to oppose Bill B22-0057, and instead protect the safety and well-being of your constituents.”