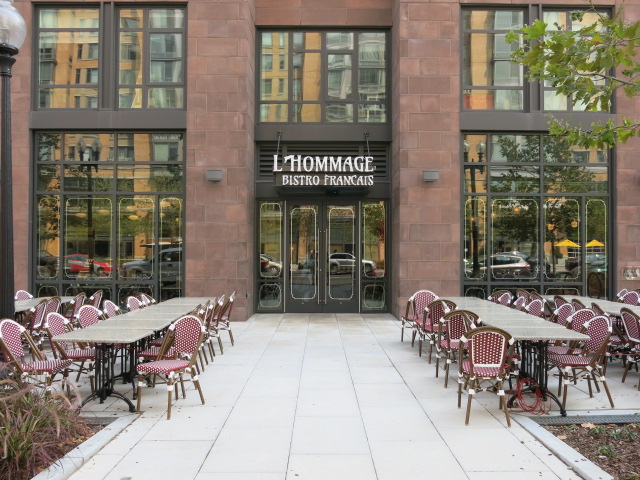 From the Mount Vernon Triangle CID:

“Restaurateur Hakan Ilhan has announced plans to launch a new restaurant and a gelateria shop in the current L’Hommage Bistro Francais and bakery spaces at 5th and K Streets, NW. L’Hommage and the bakery space will close their doors on Monday, July 3, after operating through the July 1 and 2 weekend.

After undergoing a complete redesign and renovation, the L’Hommage space will become a yet-to-be-named Latin American restaurant with a menu offering approachable, moderately-priced foods from Mexico, Spain and other Latin American countries. In the current bakery space adjacent to L’Hommage, Ilhan will open a separate gelateria — already named “Gelateria Dolce Vita” — with delicious #gelato made in-house with the best possible ingredients. This will be the second location for Gelateria Dolce Vita, with the other currently operating on the Georgetown waterfront.

Ilhan noted, “We are very excited to bring our new Latin American concept to the Mount Vernon Triangle neighborhood. The restaurant menu will provide diners with an array of fresh, house-made options, from small plates to all-you-can-eat offerings, along with an exciting beverage list. Our large restaurant space lends itself well to this new concept. Our gelateria will be the first of its kind in the community and we think it will be a perfect fit for residents, office workers and visitors from around the city.”

Both concepts will open in early 2018, joining two other Hakan Ilhan restaurants, Ottoman Taverna and Alba Osteria, as destination restaurants in the MVT CID.”

Read more →
More Stories
“The $2 to-go fee post reminded me of the following story that I wanted to forget… but here it goes…”“Saw this um, interesting ..statue?..mannequin?..on Mass ave in NE.”