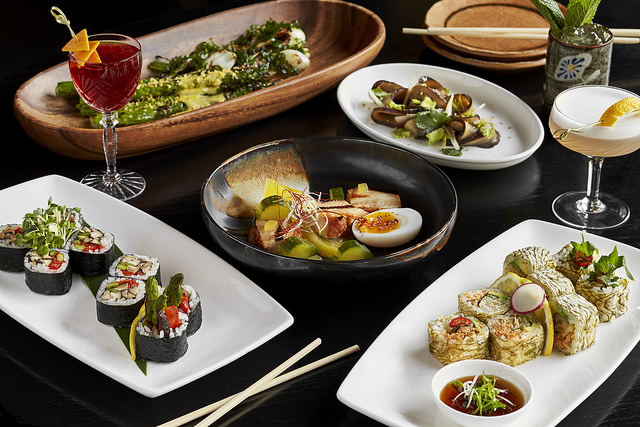 “Zentan’s kuidaore experience featuring robata and sushi – an example of some of the food that will be served at “Streets of Osaka.” photo credit: Greg Powers

“Calling all Japanophiles! Next month, Zentan and Sushi Taro will bring a slice of Osaka – a city well known for its culinary jewels – to the nation’s capital. Celebrating street culture from their native Japan, “Streets of Osaka” is a chef collaboration between Zentan’s Executive Chef Yo Matsuzaki and Executive Chef Nobu Yamazaki of Michelin-starred Sushi Taro. “Streets of Osaka” will take place on Wednesday, March 15 at Zentan. The full restaurant space will be transformed into a lively, Osakan street festival complete with food stalls, shochu and sake tastings, sushi, sumo watching, art pieces, live music and chef interaction.

From 6:30-9:00pm, general admission ticket holders can enjoy live entertainment, new Zentan cocktails, and enough food to train as a sumo wrestler. From 5:00-6:30pm, VIP ticket holders have an added opportunity to learn Japanese cooking from the masters themselves. Chef Matsuzaki, Chef Yamazaki, and Zentan Sushi Chef Lin ZhenQun will be teaching hands-on street food and sushi classes prior to the main event. VIP ticket holders will also receive a special welcome cocktail and a beverage amenity from Lead Bartender Matt Allred.

Tickets are available on Eventbrite at streetsofosaka.eventbrite.com. VIP tickets are $60 each; general admission tickets are $45 each.

Embracing the start of Sumo Spring Basho, Osaka’s annual sumo tournament that begins on March 13 this year, “Streets of Osaka” will stream sumo matches from Japan throughout the evening. Lead bartender Matt Allred will be debuting an original Zentan punch incorporating Mizu Shochu, a hand-crafted, single-distilled traditional shochu produced in Arita, Japan. The event will also feature live street music, art pieces, a raffle and a variety of shochu and sake tastings.

All “Streets of Osaka” ticket holders will be given a raffle ticket upon entering the festive event. Zentan and Sushi Taro are proud to partner as neighboring Washingtonian restaurants. All proceeds from the event raffle will go directly to Human Rights Campaign, another D.C.-based organization, to help support their mission of equal rights for the LGBTQ community.”

Next
New Series: Ask Me Anything. Vol. 1 “What is a typical day like for you?”