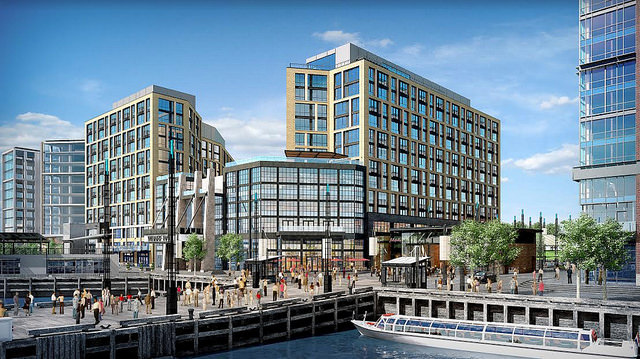 KNEAD Hospitality + Design is creating this new restaurant concept for The Wharf in partnership with Chef Roberto Santibañez, owner of the acclaimed Fonda restaurants in New York City. “Mi Vida,” which translates to “my life,” is also a term of endearment used to refer to a loved one. The 9,500-square-foot restaurant will be located at the water’s edge directly on Wharf Street adjacent to The Anthem, The Wharf’s new 6,000-person capacity music venue.

“We’re thrilled to have partnered with Roberto to bring his inspired cooking to Washington, D.C.,” said KNEAD HD co-principals Jason Berry and Michael Reginbogin. “The Wharf was the ideal place for us to bring Mi Vida to life in a vibrant and dramatic setting surrounded by some of the city’s most prominent chefs and operators.”

Santibañez, who will create the menu for Mi Vida in his role as Culinary Director, is a native of Mexico City and one of the most respected authorities on Mexican cuisine in the US. Mi Vida will raise the bar for Mexican cuisine in Washington, DC and will offer a menu inspired by street food and traditional Mexican home cooking but in a modern, elevated presentation. He plans to serve his take on Mexico City’s famous rotisseries and will feature chicken, beef and pork in unique preparations. Santibañez also sits on the board of advisors of the Latin Cuisines Council of the Culinary Institute of America and frequently teaches classes on Mexican cuisine in both the US and Mexico.

“We are delighted to welcome Mi Vida to The Wharf – especially with the inspired cuisine of its noted chef Roberto Santibañez, who is well known for creating refined Mexican Cuisine with broad popular appeal. With Knead Hospitality + Design’s distinctive touch, Mi Vida will be yet one more unique and vibrant restaurant destination at The Wharf,” said Amer Hammour, Chairman of Madison Marquette.

The design of Mi Vida will incorporate The Wharf’s industrial aesthetic and infuse it with contemporary and historic Mexican décor. Décor will include a modern take on Mexico’s traditional “Árbol de la Vida” or tree of life, an intricate clay sculpture telling Biblical or historic stories. The space will seat approximately 400 guests and will offer multiple private dining rooms as well as waterfront patio seating. Mi Vida will open in early November of 2017

“We are thrilled that Roberto Santibañez is bringing his culinary skills to The Wharf,” said Monty Hoffman, Founder and CEO of PN Hoffman. “The collaboration of Knead Hospitality + Design with Roberto Santibañez is truly exceptional—creating a best-in-class restaurant that showcases their expansive creative talents.”