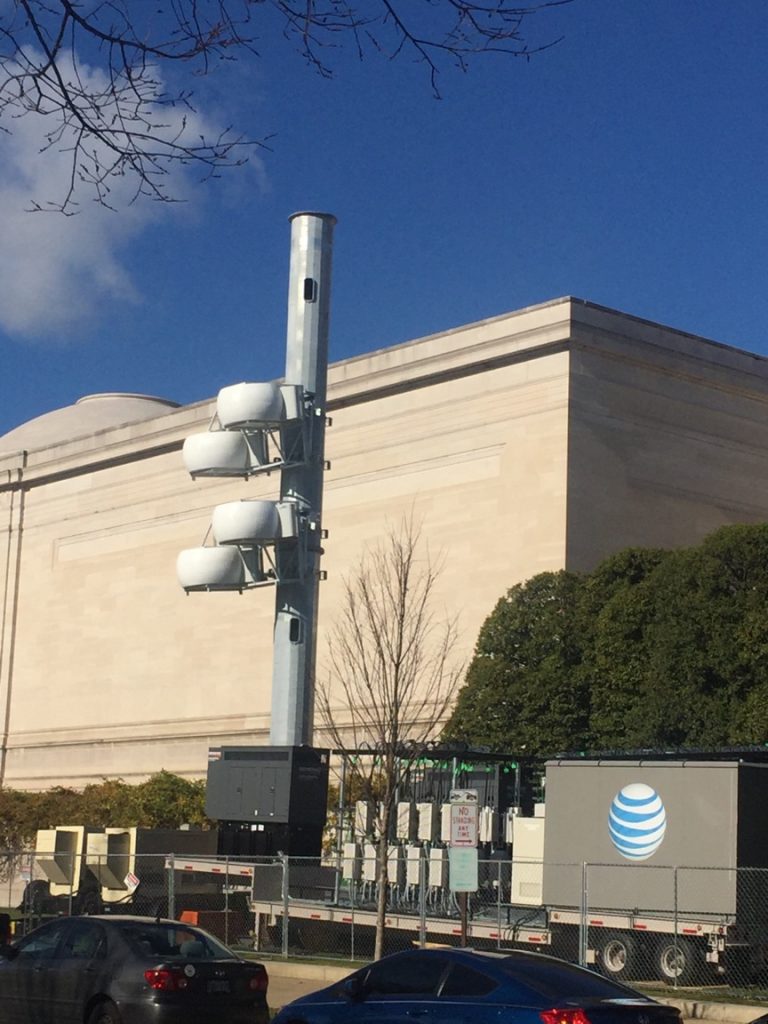 Ed. Note: I confirmed the towers will remain in place for the Women’s March on the 21st as well.

“Nearly 1 million are expected to crowd the National Mall on January 20, many documenting and sharing the experience in real time via Facebook, Instagram, Snapchat, etc. That’s a massive amount of people using their smartphones and data-heavy apps in the same place at the same time, and a massive demand placed on wireless networks in the vicinity. How do wireless carriers keep things running smoothly? A few highlights:

AT&T is investing nearly $15,000,000 and more than quintupling network capacity throughout DC to boost the network for the Inauguration, including hundreds of permanent upgrades that will benefit the city for years to come.
The company is rolling out seven Cell on Wheels or “COWs” (per the photo above, these are essentially mobile cell towers that handle spikes in traffic from smartphone users) along the National Mall – AT&T’s largest temporary network deployment ever. Two of these COWs are equipped with their highest-capacity antenna providing 20x more network capacity than a traditional cell site.
Preparations have been underway for more than two years, including testing, planning and deploying network enhancements by a team of more than 50 network engineers who have worked closely with the city and nearby communities to complete this enormous logistic and technological endeavor.

AT&T has done this before of course, but not on this scale. Consider the 2013 Inauguration: In 2012, 35% of adults in the U.S. owned smartphones compared to more than 72% in 2016. That means there will be a lot more people using social media, streaming, tweeting, and snapping on January 20.”