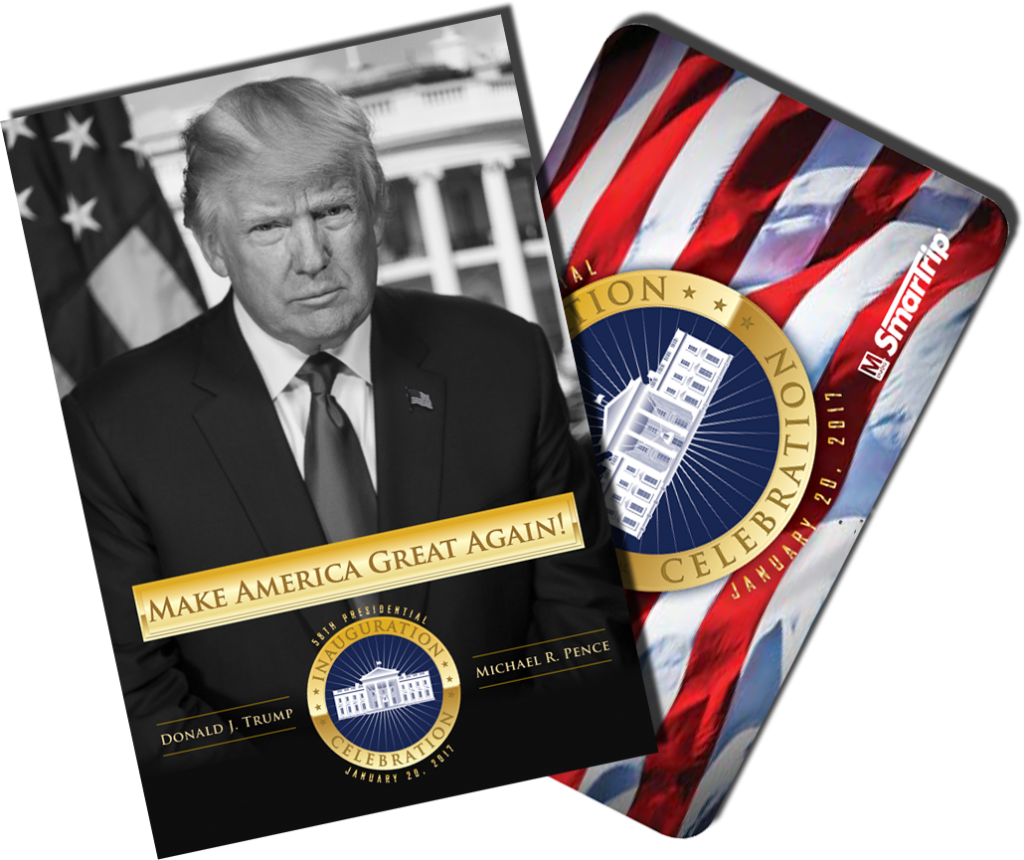 “The 2017 Presidential Inaugural Committee (PIC) and Metro today announced a special SmarTrip® sleeve to commemorate the inauguration of Donald J. Trump as the nation’s 45th president. The commemorative sleeves will be distributed at selected Metro stations, free of charge, on the morning of Inauguration Day.

In addition, the PIC and Metro are encouraging those planning to attend the Inauguration to purchase their Metro Inaugural SmarTrip cards online in advance to avoid long lines on January 20. The sleeve design features an image of the President Elect provided by the PIC and includes its inaugural theme, “Make America Great Again.”

“The Presidential Inaugural Committee has worked closely with Metro on a commemorative sleeve honoring President-elect Trump’s inauguration. The sleeve will be distributed free of charge on Inauguration Day, January 20th,” said PIC Communications Director Boris Epshteyn. “Americans from every corner of this country will be coming to Washington, D.C. for inaugural events, and we encourage everyone attending to take advantage of the discounted price of the Metro one-day pass and purchase their inaugural SmarTrip card in the next week to avoid the expected wait times.”

Metro and the PIC are encouraging everyone planning to take Metro to the Inauguration to purchase a SmarTrip card in advance before the cutoff date of January 13. Each rider age 5 or older needs his or her own SmarTrip card to enter and exit the Metrorail system. The Commemorative Inaugural Card – available at wmata.com for a discounted price of $10 – allows for unlimited travel on Metrorail or Metrobus on January 20, 2017.

“Our goal is to get as many Inauguration fare cards into circulation as possible so our visitors can skip the lines and head right for the train or bus,” said Metro General Manager/CEO Paul J. Wiedefeld. “We encourage everyone coming to the Inauguration to purchase their SmarTrip card online.”

There is no track work planned during Inauguration week, from January 14 through 21, to allow Metro to offer extra service to Inauguration events. On January 20, Metrorail will open early at 4:00 a.m. with near rush-hour service on all lines until 9 p.m.

Metro will produce 50,000 of the commemorative sleeves and distribute them to Inauguration attendees on the morning of January 20 at the following popular boarding stations:

In addition, sleeves will be available from Station Managers at Union Station, Metro Center and Gallery Place.

The sleeves will be distributed free of charge, one to a customer, while supplies last on the morning of January 20. Any remaining commemorative sleeves will be available after January 20 at Metro’s sales office, located at 600 Fifth Street, NW, Washington, DC. Metro will advise the public of any remaining supply via social media.”

Read more →
More Stories
“The goal is to encourage people who live on Capitol Hill to find a book in a Little Library, make some art, return the book to another library.”“A unique DC arts festival will take place on inauguration weekend at the new Edgewood Arts Center”