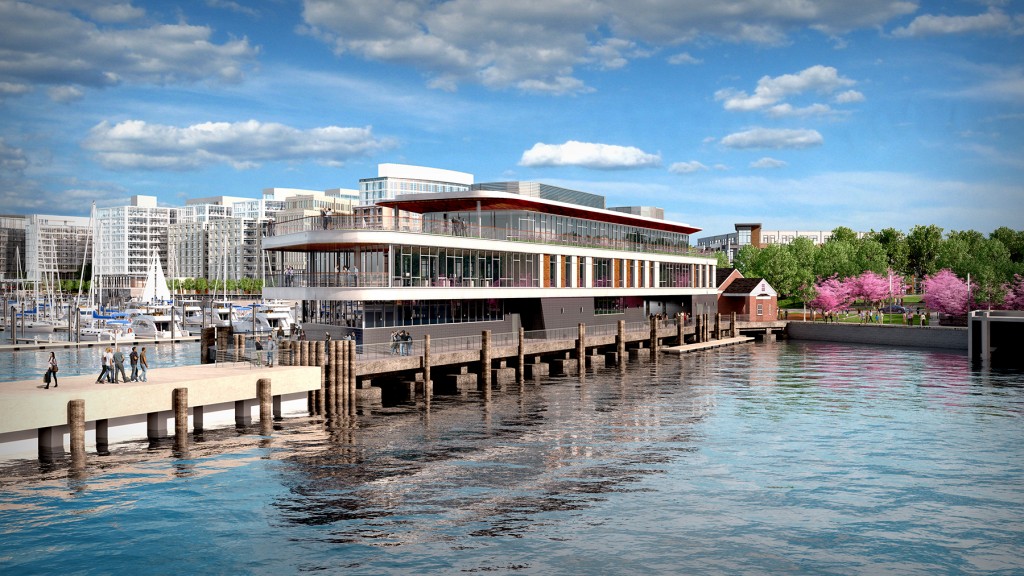 Well this is pretty cool. From a press release:

“Officials from Hoffman-Madison Waterfront (HMW), developer of The Wharf, the $2 billion, mile-long neighborhood located on DC’s Southwest waterfront, introduced DC’s first office building to be built on a pier. With Pier 4’s delivery in 2017, The Wharf continues to activate Washington, DC’s waterfront in ways that had been previously unimagined. Extending 260 feet into the Potomac River, Pier 4 will offer tenants panoramic views of the Washington Channel and nearly the entire length of a bustling Wharf Street.

“There simply will be no other office building anywhere in the country that will offer the views, amenities, design features and architectural distinction of the Wharf,” said Amer Hammour, Chairman of Madison Marquette. “In many ways, Pier 4 is a landmark of this transformative project, overlooking the Potomac River in the middle of one of the largest urban redevelopment programs in Washington’s history‎.”

“In a city as storied as our Nation’s Capital, it is rare to encounter office space that can offer something truly new to the market. Being directly on the water, and being immersed in the activity along The Wharf are an experience that simply can’t be offered anywhere else in the city,” said Monty Hoffman, Founder and CEO of PN Hoffman. “In addition to the unparalleled location, tenants will find superior quality in Pier 4’s light-filled space that has integrated cutting-edge connectivity and all of the hallmarks of contemporary trophy office space.”

The 28,000-square-foot Class-A building boasts views of the Potomac River and looks over The Wharf and active waterways to the north. Building amenities include up to 12’ ceiling heights, private covered outdoor terraces, a bike storage room with lockable racks, and a changing room with shower. The lobby’s double-height entry has polished concrete flooring, exposed steel beam architectural component, and a grand natural wood feature wall. Typical column bays are 20’ by 30’, providing users with spectacular view corridors and natural light. Additionally, the building is designed to LEED® Gold Core and Shell standards.

Part of The Wharf—a multi-modal neighborhood only blocks from the US Capitol—Pier 4 is incredibly accessible. The Wharf is only 10 minutes by car from Reagan Airport or Union Station and within walking distance to L’Enfant Plaza and Waterfront Metro stations. Free shuttle service to L’Enfant Plaza and the National Mall, four Capital BikeShare stations and regional water taxi bring all of the city’s highlights within easy reach.”