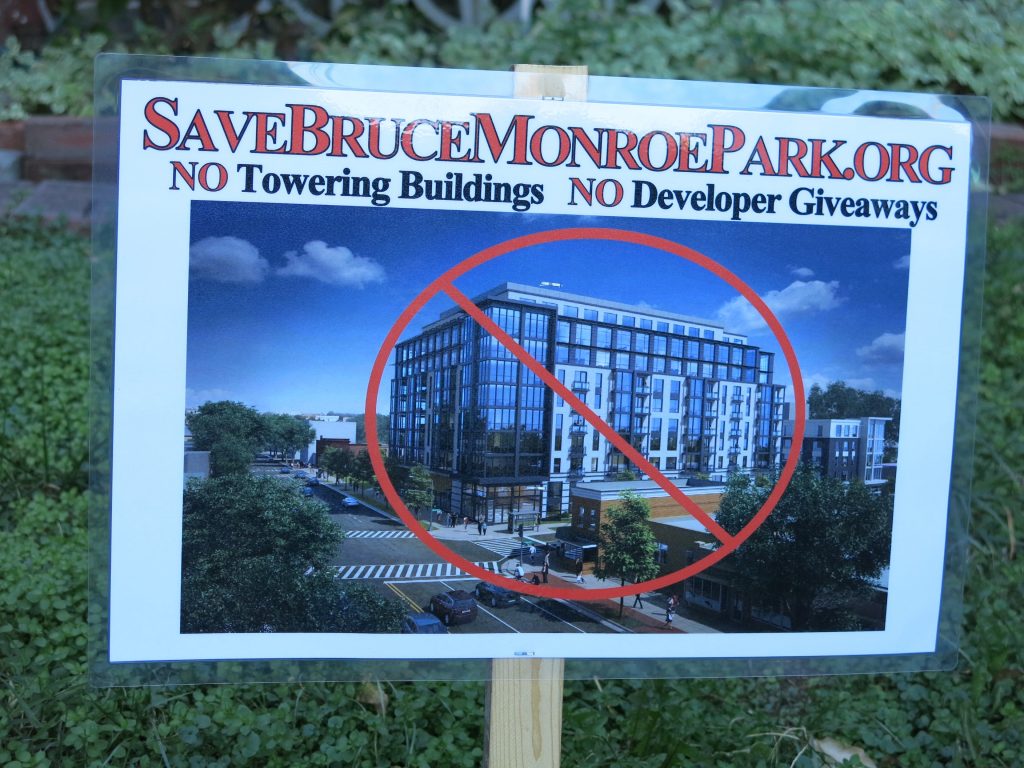 I was wondering you could post something in support of Save Bruce Monroe Park. The City is planning on turning it into a 9 story luxury condo building on Georgia Ave, and I think many of our neighbors would be opposed to this if they were aware. People need to call their councilmembers today before the Council votes tomorrow on whether to postpone a final vote.

There is also an email tool that people can use.

More info on the park.

I love the Columbia Heights/ Petworth area, and it would be a real shame to lose this park to more condos.”

“Today, the Council of the District of Columbia voted unanimously at their Committee of the Whole meeting to place the Bruce Monroe surplus and disposition resolutions on the consent agenda for approval at today’s final Legislative Meeting of 2016. This action supports the effort for the site to be used as the “Build First” site in the District’s effort to replace the Park Morton Housing Complex with a new mixed-income community without displacing Park Morton families from the community. The Zoning Commission is scheduled to take action on the related Park Morton Planned Unit Development cases on January 30, 2017, following two hearings held earlier this month.

Prior to today’s Council action, Advisory Neighborhood Commission 1A voted in early 2016 to support the surplus and disposition of the Bruce Monroe site for the Park Morton effort with the condition that the District include a large, permanent park as part of the redevelopment effort. The District Government recognized this condition and 1.02 acres of the site will be redeveloped as a permanent park with programming to be determined with input from the community. A 6,700 sq. ft. central green is also planned for Morton Street as part of the redevelopment project. Advisory Neighborhood Commission 1A will continue to explore opportunities to improve, create, and expand public access to park spaces in the Columbia Heights, Park View, and Pleasant Plains neighborhoods as it considers future development and engages in the Comprehensive Plan amendment process.

In addition to preserving 147 public housing units and establishing new permanent park spaces, the redevelopment effort will increase area housing for seniors and families at all income levels. The project will also have a significant and long-lasting positive impact on lower Georgia Avenue. In addition to increasing area housing options, it will also improve public safety and encourage development along the corridor. By aligning new roads and reknitting the development on Morton Street into the surrounding community, blind alleys and the Morton Street cul-de-sac will be removed – a configuration that is not conducive to public safety. And by removing the uncertainty on whether the redevelopment of Park Morton will move forward, the District will encourage developers who own property on Georgia Avenue to move forward with their respective projects.