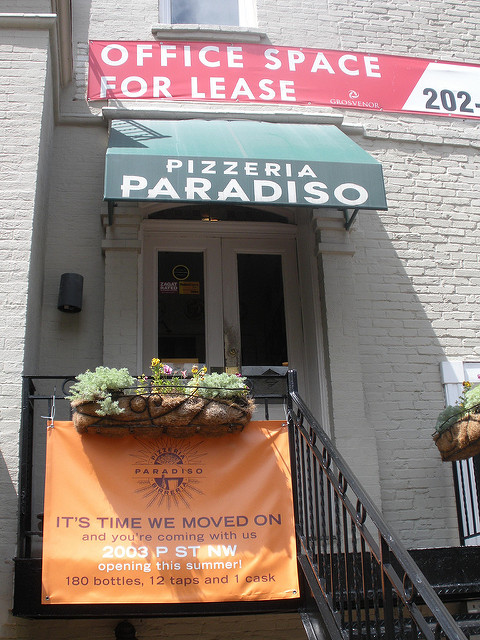 “Pizzeria Paradiso, with three locations in the DC area and a fourth on the way in Hyattsville, Md., will celebrate 25 years this November with an anniversary party, beer dinner and one week of its original 1991 menu and pricing to honor owner and Chef Ruth Gresser’s influence on the District’s pizza and craft beer offerings.

Pizzeria Paradiso’s Dupont Circle location opened in 1991 to critical acclaim and has been honored with a spot on Washingtonian Magazine’s Very Best Restaurants list, in Phyllis Richman’s Washington Post dining guide and as one of Zagat’s best restaurants nationwide. Gresser has since opened two additional locations – in Georgetown and Old Town Alexandria – established a first of its kind craft beer destination in Birreria Paradiso, and launched a fast-casual concept, Veloce. Over the years, the restaurants have welcomed weekly regulars—many of whom are known by their order—as well as celebrity clientele such as Matthew Broderick, Mick Jagger, Chelsea Clinton and George Stephanopoulos, just to name a few.

Credited for popularizing Neapolitan-style pizza in Washington, Gresser is a graduate of Madeleine Kamman’s Classical and Modern French Cooking School and has also been instrumental in shaping the District’s craft beer culture; directors of Birreria Paradiso’s highly regarded craft beer program—including Thor Cheston and Sam Fitz—have gone on to launch notable brewpubs and beer destinations of their own. One secret to Gresser’s success: cultivating a true family dynamic with her employees, who gather for a Christmas Eve breakfast each year and have enjoyed healthcare benefits before mandated by the law. She earned recognition from President Obama and an invitation to the White House for the signing of the American Jobs Act.

This month marks the restaurant group’s 25th year and a week of celebrations kicks off on Nov. 14 with a party for restaurant regulars, past and present staff, and members of the industry. The invitation-only event will feature a tap takeover by former Paradiso beer directors, Thor Cheston, Greg Jasgur and Steve Mendoza. Paradiso favorites and special pizzas inspired by Chef Carla Hall, Chef Amy Brandwein and Chef Elizabeth Falkner will also be available along with a fundraiser for Women Chefs & Restaurateurs. Beer Director Josh Fernands has collaborated with Right Proper Brewing Company’s Nathan Zeender on a special 25th anniversary beer, which will be released at the party and available at all three restaurant locations beginning on November 15**. While this event is closed to the public, patrons can partake in a week of specials and a commemorative beer dinner.

Between November 14 and 20, all three locations will feature items from the pizzeria’s original menu, complete with original 1991 pricing. Throwback menu items include:

Selection of house made ice cream

The current menu will also continue to be available.”

more stories
Previous
“It would be awesome to have a great restaurant in this beautiful and historic building.”

Next
“I’d love thoughts on this insanity I am running into with DCRA.”