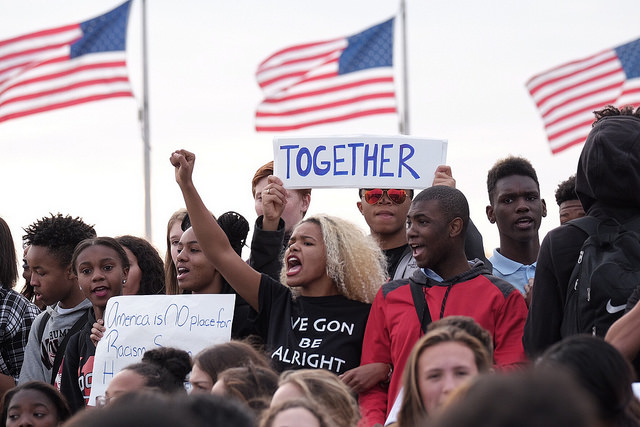 Yesterday I was verbally assaulted and threatened in a way I had been fearing ever since the election campaign dove into racist, misogynistic, anti-immigrant rhetoric. I have never felt more vulnerable as a woman, a Latino, and an immigrant. I never thought I would be in this situation, but it did happen to a friend and me today, so I thought I would share because first of all, in case there were any doubts, I want people to know this is happening in DC, and also because I wished I had had the opportunity to thank the very brave young man who put himself in danger, stood up to this bully, and allowed us to escape from a very dangerous situation.

It was around 4:30pm and my best friend and I were on our way to the movies. We were on bikeshare rides, nearing 14th and R NW, talking in Spanish as we slowed down for the red light. All of a sudden a man started to yell at us, telling us to “shut up”, to “speak American”. At first I thought he was just crazy, then I thought he was drunk, and then unfortunately I realized he was neither.

He was a short, grey haired, bulky, latino man. He continued yelling, got in front of us and started stomping his feet on the ground. He was yelling (in broken English) that he was an American citizen, aggressively and repeatedly demanding that we “say Trump!”, and calling us demeaning names both in English and Spanish.

As soon as I realized I was trapped between the traffic and the man, I was terrified and started trying to figure out how my friend and I could get away to safety. But the guy was standing in such a way that we really had nowhere to go. And he was not backing off. I tried to take my phone out to call 911, but then put it back because I was so afraid – he was much too close. That’s when I saw a guy crossing 14th, looking very upset. He immediately positioned himself between the latino guy and us, and demanded that he back off and go away. The latino guy (who was much heavier than him) threw him to the ground and chased after him as he tried to walk away.

At that point my friend pulled me out of my frozen state by telling me that the light had turned green. Then a woman driving a black SUV placed her car to our right, separating the aggressive man from us as if to protect us, while he tried to follow the young man into an establishment. At that point we just rode away. I was in shock and so was my friend.

But I’m feeling for women. And Latinos. And blacks. And Muslims. And the LGBT community. And all other minorities. These four years are going to be very challenging and the only way to get through them will be to stand by each other and show no tolerance for those who, if unchecked, would be unconscionable bullies while believing themselves to be receiving validation from the highest office in the land.”