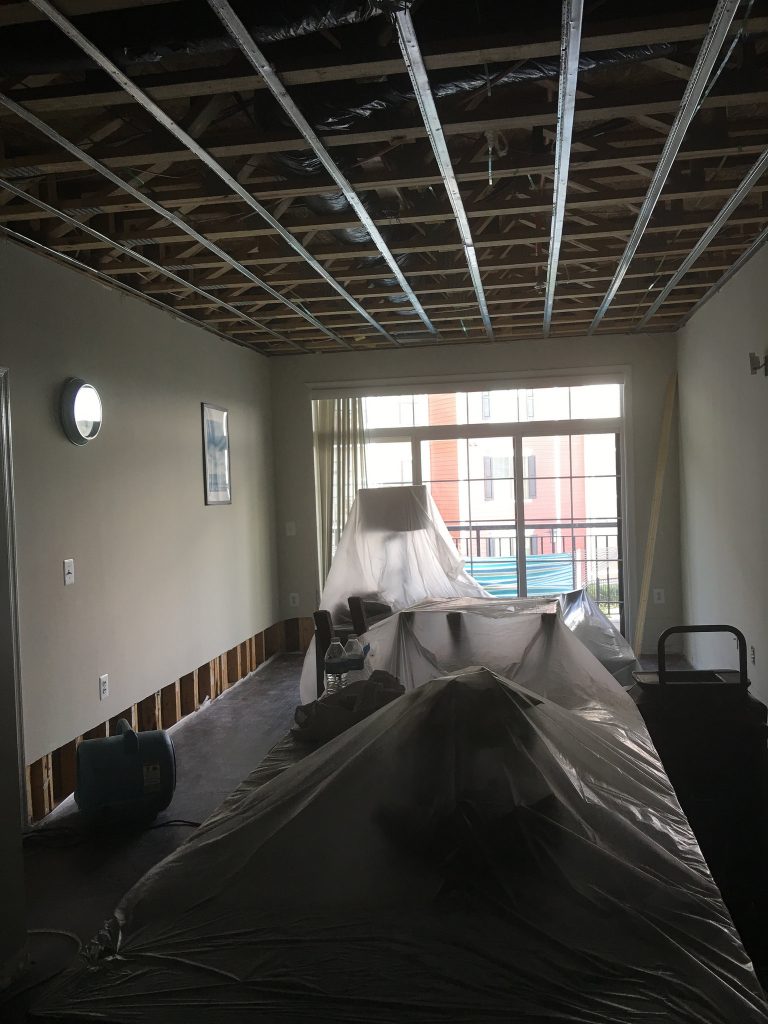 I recently had been a resident of Rhode Island Row in NE DC. That was until the person living above me started a fire and ran out the building with no shoes on. The fire caused my whole apartment to flood with water and destroy almost everything my roommate and I own. If that wasn’t horrible enough the way Bozzuto management handled the situation was appalling.

Here is the story in details.

I’m taking a nap after work and am awoken by the lady above. She screams fire and all I hear are loud noises. BANG BANG, loud noise after loud noise. Then the fire alarm in the whole building goes off. I’m still half asleep and no idea what’s going on. The fire alarm goes off all the time. It’s got to the point where I just ignore it when it goes off. That’s when water starts pouring from the ceiling. It’s started in the kitchen from from the light fixtures in the ceiling. With in 2 mins it went from dry apartment to India during monsoon season. I run downstairs to ask the front desk for help in saving my apartment. Took my about 10mins of searching to find anybody that worked in my building. All they told me was to go outside and exit the building. I told him my apartment is being flooded. He just said leave the building. That’s what I did, I went outside and waited for the firemen to let me back in. Waited outside for about 30-45 mins. As I’m walking back to my apartment I can hear water pouring from 1/2 way down the hallway. When I get to my apartment door it sounds like the rain forrest. Open the door to around 4 inches of water in my place with more coming down with no sign of stopping. Once again I try to find someone who works at my building, with no luck. I just go to the fireman and tell them what’s going on. The firemen help me move some things like my TV, couch and unplug everything. At this point there is no saving my bedroom that’s completely under water. My roommate gets home, I called him when I was waiting to get back in. He can’t believe how much water there is. The apartment mangers finally arrive, they look at my apartment for about 3 secs then leave. Didn’t even talk to me or my roommate. I asked the fireman how this fire started. He kinda chuckles and says it’s under suspicion due to the amount of drugs and alcohol in the apartment above. They guy who was home ran out the building with no shoes on and fled. I have no idea if he is free or if they caught him.

This is when my roommate Jon and I go down to the office to talk to the management staff. We want to know more about how the fire started. They said the guy ran and that’s all they say. No mention of the drugs and alcohol the firemen told us about. We tell them the upstairs neighbors are always loud and have way to many people over all the time. Then they start to insinuate that this is our fault for not complaining about him. That if we had filled complaints this wouldn’t of happened. My roommate and I go from shock to anger. They are trying to put the blame on us. Then they tell us our apartment will be fixed in 3-6 days and not worry they will help us move and they will take care of this. Lies, lies and more lies from the start.

We go back to the apartment to take some photos and videos of what happened. That’s when this guy from a construction crew type job shows up and starts moving things and bringing in a crew of people to start putting plastic up. No one has said a word to us about bringing in a crew of people. He tells us this apartment will be unlivable for 30-90 days and all our belongings are going to be put in storage. Now I don’t have a car and I don’t want my stuff in some random storage I’ve never been too.

We go back down to start talking to management. Who tell us they are trying to get us a hotel for one night. Yeah only one night. We ask what are we gonna do after one night. They have no idea what do to do with us. We ask if we can get a new apartment that Bozzuto manages. They say yes but that is breaking our lease and we will have to pay a penalty. We can’t believe what they are saying. They keep telling us we should just go to a hotel and sleep. Neither of us wants to leave all our stuff in our soaked apartment with a crew of people in there moving everything. After arguing they say if we take a apartment across the street, still in Rhode Island row, we won’t have to pay a penalty for breaking the lease. We have to sign a new lease and get renters insurance before the get us keys to our new place. They also didn’t check if the keys they gave us worked and asked if we would go check and see. The place they gave us has no furniture and they washer and drying isn’t working.

We go back to our apartment to get things we will need. Everything we own has been moved and tossed in corners of the room while crews of people start tearing down dry wall. Everything that isn’t soaked is now covered in dirt and dust. After being told over and over and over by our management company they would help us move. They ordered food and watched us move our belongings across the street. I slept on the floor that night with the one blanket that wasn’t soaked with no pillows and no idea what’s going to happen. Things only got worse.

My roommate and I wake up to our new apartment go back to see what’s going on. Even more dirt and torn down walls everywhere and we ask about our stuff getting moved. We get a number for a moving company that says it will cost $2000 to move last min on a weekend and we should just sign and they will take it out of our insurance later. That this point I can’t believe what I’m hearing. My roommate calls the Bozzuto head office and after about a hour yelling at everyone they finally get so frustrated with us they say we can leave with no penalty. Gave us 30 days to move our stuff out before they toss it in the trash. They also tried to get us to pay for the electric bill for all the industrial fans and blowers that we’re in the apartment for days. We wouldn’t find that out till later when we got the bill.

We spent 2 nights sleeping on the floor there before we got a new apartment that I slept on the floor on. I can’t believe the way they treated us. All they cared about was their apartment. They had no problem blaming us and trying to get as much money out of us as possible before they kicked us to the curb.