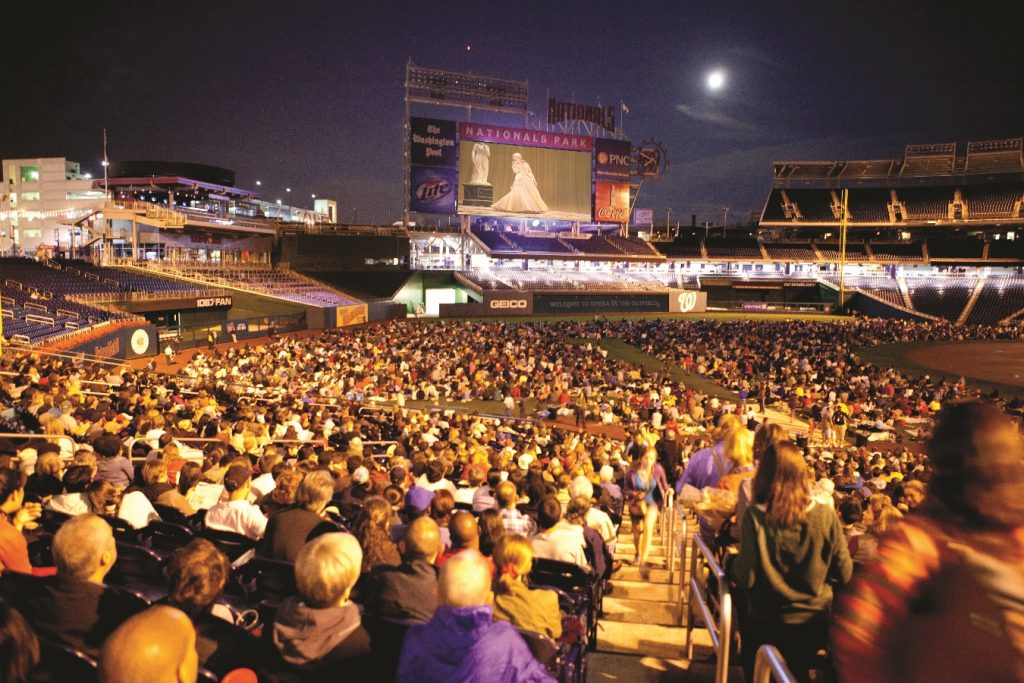 “Washington National Opera (WNO) celebrates the return of free opera simulcasts to Nationals Park with title sponsor Mars, Incorporated with the M&M’S® Opera in the Outfield performance of Mozart’s classic romantic comedy The Marriage of Figaro on Saturday, September 24, 2016. Gates open at 5 p.m. for “pregame” activities, and the opera will be broadcast live from the Kennedy Center Opera House to the high-definition NatsHD scoreboard at the ballpark at 7 p.m. Free seating will be available in the stands, while access to the outfield grass will be limited on a first-come, first-served basis when gates open at 5 p.m. More information, including a chance to RSVP to win prizes, is available at OperaintheOutfield.org.

Attendees are encouraged to arrive early and enjoy the festive ballpark atmosphere. Beginning at 5 p.m., the special pre-show entertainment will include:

 Performances by local artists, including vocal students from the Duke Ellington School of the Arts Opera Program and dance students from Savoy Elementary School, a Turanaround Arts school of the President’s Committee on the Arts and Humanities.
 A meet-and-greet with M&M’S® Brand Chief Chocolate Officer, Ms. Brown.
 AMERICAN HERITAGE® Chocolate demonstrations and lessons in chocolate
history.
 A screening of the Warner Bros. cartoon “What’s Opera Doc?” starring Bugs
Bunny. Set to Wagner’s iconic “Ride of the Valkyries” from The Ring, this parody
of opera is best known for Elmer Fudd’s proclamation “Kill the wabbit!”
 Photo opportunities for kids of all ages with the living statue of Babe Ruth as well
as various opera characters.
 Kids can play in the open playground, dress up with items from the Washington
National Opera costume trunk, visit the craft table, and have their faces painted
by expert makeup artists.
 Chances to win prizes, including a walk-on role in WNO’s new production of The
Daughter of the Regiment, a family fun pack of four tickets to The Curious Incident of the Dog in the Night-Time at the Kennedy Center, tickets to the Kennedy Center’s 19th Annual Mark Twain Prize for American Humor honoring Bill Murray, a prize from M&M’S® Brand Chocolate Candies, and more.

Hosted by WNO Artistic Director Francesca Zambello, this event will feature a live broadcast of The Marriage of Figaro to the state-of-the-art NatsHD scoreboard. The opera tells an upstairs/downstairs story of love, lust, seduction, infidelity, and ultimately, forgiveness, all set to some of the most sublime and memorable music ever written. The vibrant production, adapted from The Glimmerglass Festival, is directed by Peter Kazaras, whose La bohème was a hit of WNO’s 2014–2015 season. The opera is performed in Italian with English captions, making it easy to follow along with the story and music.

M&M’S® Opera in the Outfield will take place rain or shine—in case of inclement weather, some covered seating is available. Regular concessions will be available throughout the ballpark.