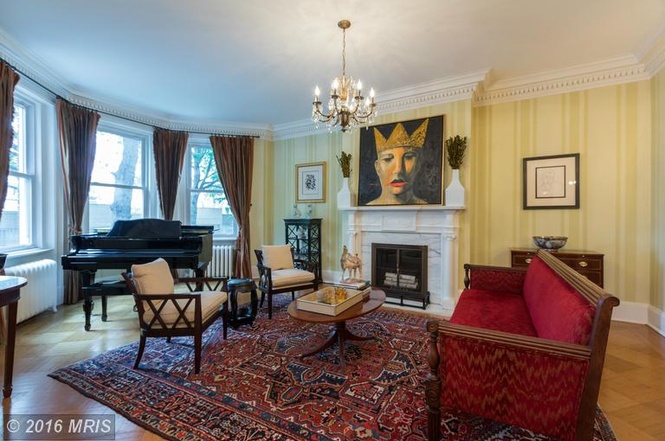 Last week for Good Deal or Not Revisited (GDoN-R), we revisited the settled transactions of duplex condos in a converted Mount Pleasant Rowhome. What was significant about that sale was that each condo unit sold for at least $1,250,000. This puts a whole new spin on Mount Pleasant, which is largely known for being a tucked away NW DC residential neighborhood with large (and thus far largely intact) single family rowhomes.

Today’s subject is not geographically far from tree-lined Mount Pleasant (less than a mile and a half). Further south of the zoo, and close to Adams Morgan bars and restaurants, the Kalorama neighborhood is dotted with grand apartment and co-op buildings, embassies, and is where President Obama will reside with his family after January.

Noted in the listing to be 7000 square feet of interior space, this may be the largest home profiled to date on GDoN-R. It currently lists eight bedrooms (with just a one bedroom basement rental included in the total), and a comfy five and a half baths (again, with one in the basement).

There are three prior listings for the subject house in the multiple listing service from over the years since listings started to be archived in the mid-1990’s. Sadly, there are no interior pics from back in the day, but the value history pretty much follows the market trajectory of DC over the past fifteen years or so. Pre-renovation, in 1999, it sold $45,000. under list price for $650,000. In hot 2005, it sold for $1,700,000. with a “Renovated state of the art kit”. A scant two years later, another $400,000. tacked onto the price, it was marketed as a “FABULOUS BUY FOR THE MOST DISCERNING CLIENT”.

The listing agent for this sale was Jim Bell with TTR Sotheby’s International Realty. Michael Fowler with Compass represented the Buyer.