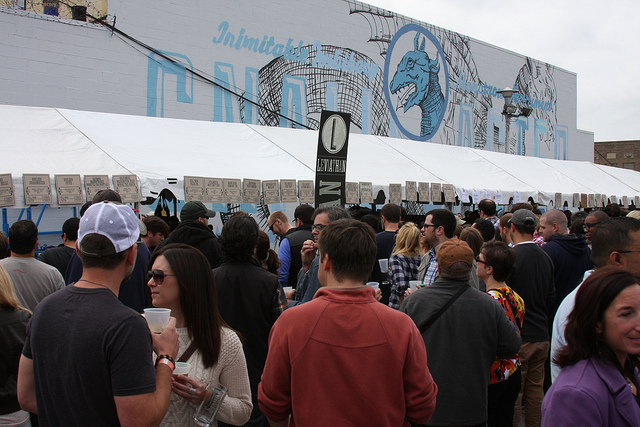 “On Saturday, September 17, the fifth installation of DC’s largest craft beer festival, Snallygaster, will return to Yards Park. Named for the fearsome and mythical dragon-like beast said to terrorize the region at the turn of the century, Snallygaster is a craft beer festival from the team behind ChurchKey, Birch & Barley, Bluejacket, Rustico, The Sovereign and more. For this momentous fifth year, no fewer than 350 unique craft beers from around the globe will be offered against a backdrop of fine food, live music and entertainment all at the Capital Riverfront from 1 PM to 6 PM. Snallygaster will also feature live music including performances from Speedy Ortiz, local artists and DJ’s who will provide entertainment from start to finish. Snallygaster (located at Lot H/I on First St SE & N St SE) benefits Arcadia Center for Sustainable Food & Agriculture.
Beer Director Greg Engert is crafting what will undoubtedly be the largest and most unique beer list of any Snallygaster to date. Guests can expect to find nearly 50 brews making their DC debut at Snallygaster 2016, dozens of vintage beers, more than 75 barrel-aged brews and sour ales, a wide array of autumnal releases, a deep list of German-style beers, a slew of craft cans, plus cask ales and Franconian gravity-poured/rubber-clad kegs. Of the 350 craft brews tapped on September 17, some standouts will include Cantillon Fou’ Foune, Founders CBS, Allagash Ghoulschip, Aslin Bringing Sexy Back, Firestone Walker Krieky Bones and Perennial Barrel-Aged Abraxas. More than 60 of the beers have already been released with new additions being released regularly leading up to the event.

Visit www.snallygasterdc.com for the latest.

This year, Snallygaster will have two stages for musical entertainment –one in each of the lots near Nationals stadium that Snallygaster encompasses. Performers including featured artist Speedy Ortiz will draw music fans, while local artists and DJ’s will keep the party going all afternoon long. Additionally, Snallygaster will expand upon their recreation area this year with photo activations and  “Macroland”, a game area devoted to jumbo-size games and activities.

Advance tickets to Snallygaster with special pricing are on sale now at www.snallygasterdc.com. The Kraken at $35 includes 1PM entry, admission, 30 food + drink tickets, and a custom Snallygaster glass and the Gargoyle (VIP) at $60 includes early entry at 11:30 AM, admission, 30 food + drink tickets, and a custom Snallygaster glass. These ticket packages are only available online in advance of the event. On the day of tickets will be available at the door and guests will be asked to pay a $10 donation at the door to benefit Arcadia Center for Sustainable Food & Agriculture. Food and beverage tickets will be sold separately ($1 = 1 ticket) with items costing on average between 5 and 9 tickets (beers will also be offered in tasting portions for 3-6 tickets). Children (14 and under) accompanied by a parent will be admitted at no cost.”