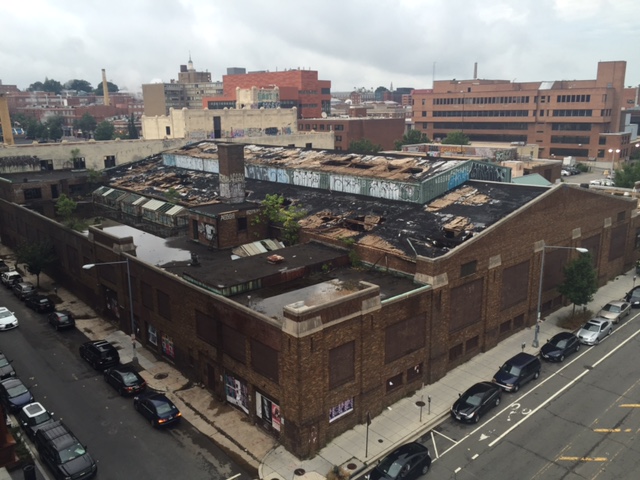 (The image looks northeast from the intersection of 8th and V Streets, NW.)

I nominate these two buildings on the 2100 block of Georgia Avenue, NW for the Horse’s Ass award. These derelict properties are on the site of the once planned Howard Town Center. The development, proposed years ago, received an $11 million tax break in 2012 (over the objection of DC’s CFO) before being canceled in 2013 after a falling out between Howard University (the property owner) and Cohen Siegal Investors (the developer).
The two parties locked in a legal dispute ever since. The most recent news available (June 2015) is that the DC Court of Appeals overturned an earlier ruling and sent the matter back to a lower court.
The properties suffer from extreme neglect, with substantial damage in particular to the roof where it has clearly caved-in in multiple places and with standing water and the growth of trees, shrubs, and grass. The buildings continue to languish and slowly collapse yet remain listed as “vacant” by DCRA instead of “blighted” for some unknown reason.
The buildings have significant potential and historic significance and it would be great to see a mixed-use development preserve as much character and facade is possible. The brown building in particular could be repurposed as a market hall (e.g. Chelsea Market or Union Market) with apartments on north side of the property. Will require a developer with patience and vision, however.

The properties comprise the the former Washington Railway and Electric Company Garage (2112 Georgia Avenue – the building with substantial damage in the picture) and the former Bond Bread Factory (2146 Georgia Ave. – the taller cream colored building with graffiti). Both buildings are on the DC Inventory of Historic Sites and their histories are detailed in a 2013 DC Government report.”