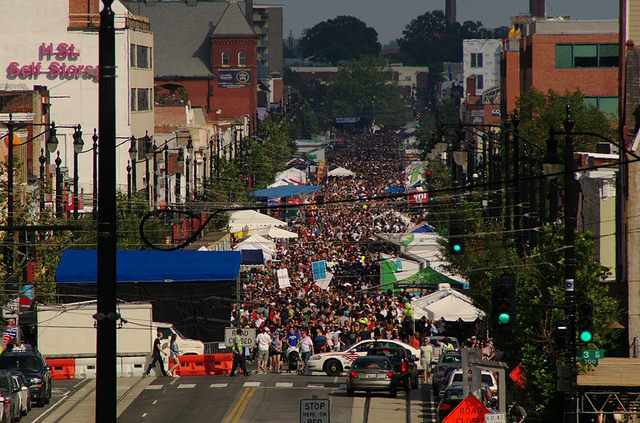 “The 2016 H Street Festival will take place on Saturday, Sept. 17 from noon – 7 p.m. This year’s event will span 10 blocks of H Street NE with 14 staging areas, dozens of interactive attractions and displays and over 250 businesses, restaurants, community organizations and vendors. Join us for great entertainment, food, drinks, contests, family-friendly activities and more!

Organized by H Street Main Street, the annual event highlights the unique spirit of the H Street NE Corridor and is one of the most popular in the D.C. region. It’s been named the best community Festival by The Washington City Paper for the last six years and regularly attracts a crowd of over 125,000 fun-seekers.

Attendees coming to the Festival to enjoy music, contests and other entertainment, won’t be disappointed. The Festival will have a variety of shows, featuring some of the best local and regional performers in Go-Go music, rap, R&B, jazz, rock-n-roll, soul music, gospel and more. There will also be pie eating and tattoo contests, dance performances from a variety of cultures and disciplines, martial arts demonstrations and many more non-musical acts.

For those coming to eat and drink, this year’s Festival will offer a bounty of delectable edibles and libations. The culinary offerings will span everything from American staples such as barbeque and fried chicken to exotic and unusual dishes from all corners of the globe. And for those festivalgoers who come hoping to enjoy some spirits, we’ll have multiple beer and liquor gardens.

– Karaoke Stage – Those who are brave enough to become one of the Festival’s performers themselves are encouraged to come ready to sing! (9 & H)

– The Kids Zone – Featuring Lowe’s Build and Go where kids can use mini building blocks to build birdhouses, toy boat, mini cars and other structures. (5 & H)

– Expanded Fashion Stage – This year’s Fashion Stage will be our biggest yet in size and shows. We’ll have more designers than ever, as well as the Festival’s first hair show. (12 & H)

– PokemonGo Zone – Want to hang out and catch Pikachu? We’ll have lounge areas set up at the intersection of two PokeStops and will be putting out lures all afternoon. The space will also be complete with comfortable seating, charging stations and beverages for purchase. (Multiple Locations)

– The ModeloZone – The AutoZone parking lot will be transformed into the ModeloZone courtesy of this year’s official beer sponsor. (12 & H)

– “Diageo” Liquor Garden – Hosted by the Festival’s liquor sponsor, the garden will offer drinks featuring some of the company’s best and most popular brands such as Ciroq, Tangeray and Crown Royal. (11 & H)

– Chess Academy – Always wanted to learn how to play chess? Well this is your chance! Chess experts will offer free lessons on how to play and win. (Location: TBD)