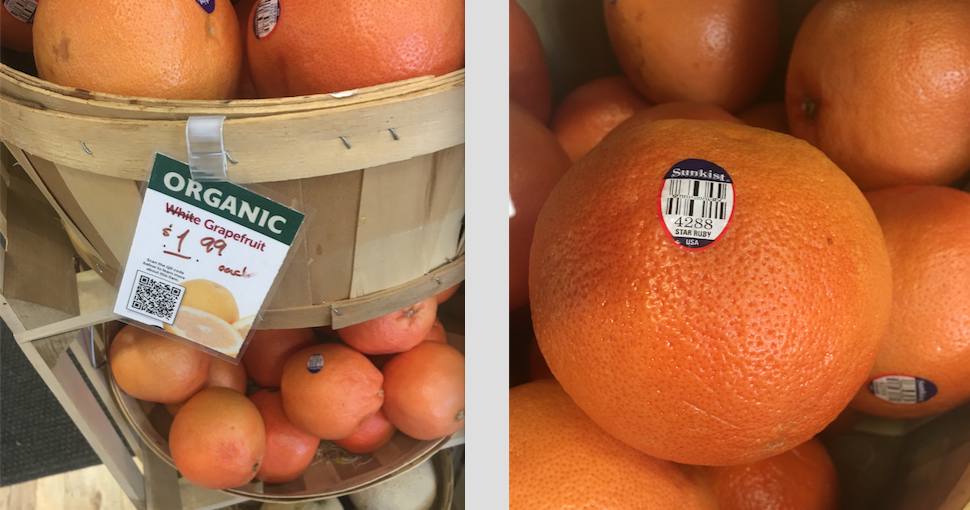 “Yes! Organic on 14th & V Streets has been mislabeling ‘certain’ produce as “organic” that is NOT organic and has been charging double the prices.

Unfortunately, I am very sad to tell you that the Yes! Organic market has been using signs to advertise some NON-organic produce as organic. Organic food has a barcode that starts with the number 9. Conventional (non-organic) food has a barcode that starts with the number 4. For example, the fruit in the store was under a sign that says “Organic Watermelon” or “Organic Grapefruit” (see pictures) but I checked the barcodes and the oranges and watermelon all started with the number “4”. I noticed this on Saturday morning and alerted the people working there. I stayed to make sure they changed the signs for the fruit I had found. I did not check all of the fruit – only the watermelon, oranges and papaya. Every orange and every watermelon was not organic. The papaya was organic.

The manager was out of town so I gave the employee I spoke with at the store my phone number and asked that the owner call me. The owner called within an hour and was very apologetic. He said this definitely should not have happened and he would be going to the store that day to talk to all the employees. He also said he would talk to the person who purchases produce for the store to make sure they purchase organic grapefruit. I explained that I eat “organic” grapefruit from there almost every day and was very upset that I had been spending $2.00 on what I thought was “organic” grapefruit only to discover it is covered in toxic pesticides and a GMO. At first, the owner said he was “happy to reimburse me for any food I had purchased that I later confirmed wasn’t organic.” Since I can’t travel back in time, he was obviously assuming that there was no way I could prove that a grapefruit I bought in March wasn’t organic. But I flipped it around and said “Great! Just show me the purchase orders for grapefruit for the past 6 months for the store on 14th Street and, if the purchase orders are in fact for organic grapefruit, then no need to reimburse me.”

He immediately got quiet and said he would reimburse me for all the grapefruit I had eaten. Bottom Line: once I discovered the error, the burden isn’t on me to prove the grapefruit THEY have been selling for the past 6 months wasn’t organic, the burden is on THEM to prove that it was organic. He said the store strives to have 95% of its products be organic and that corn and watermelon are generally the few produce items that normally wouldn’t be organic. It makes sense that they wouldn’t get organic corn or watermelon,** but seemed strange to me because that for the past month, there has been a sign that said “Organic watermelon on sale for $5.99”. If the store makes a conscious decision not to buy organic watermelon, then they should know not to put up a sign saying its organic.

A couple hours after we spoke on Saturday, I stopped by the store and picked up the gift cards he had left me. It’s my understanding that the owner immediately went to the store and talked to all the employees. I saw that they had moved the grapefruit to a different basket that is properly labeled as “conventional” and left the watermelon under the $5.99 sign (but the word “organic” is crossed out). While I appreciate that they took prompt action, some things that were said to me just don’t add up. 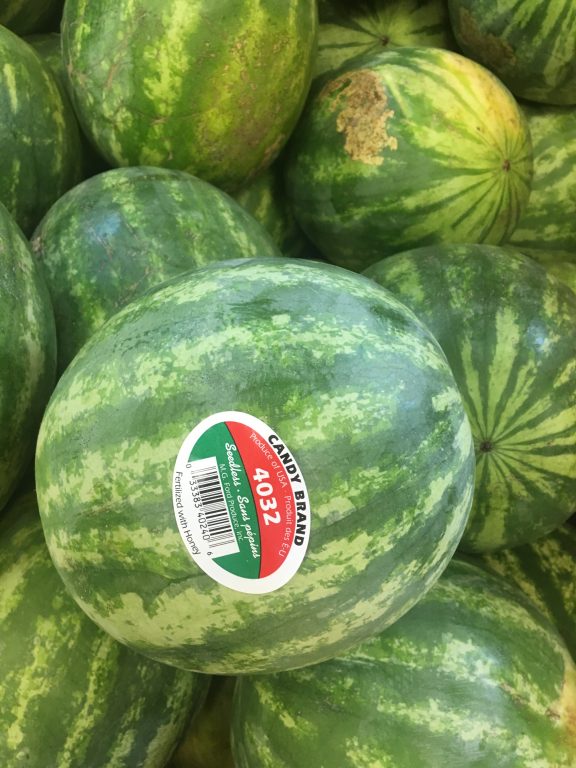 **FYI – almost all corn is GMO so that’s why corn is rarely organic and watermelon is generally considered the fruit that is the most safe to eat non-organic because the rind is very thick so it’s less likely pesticides will leak inside it (unlike strawberries, blueberries etc). It makes sense that they don’t have organic corn and would sell non-organic (“conventional”) watermelon but that still doesn’t explain why there has been an “organic” watermelon sign for the past 4 weeks.**”