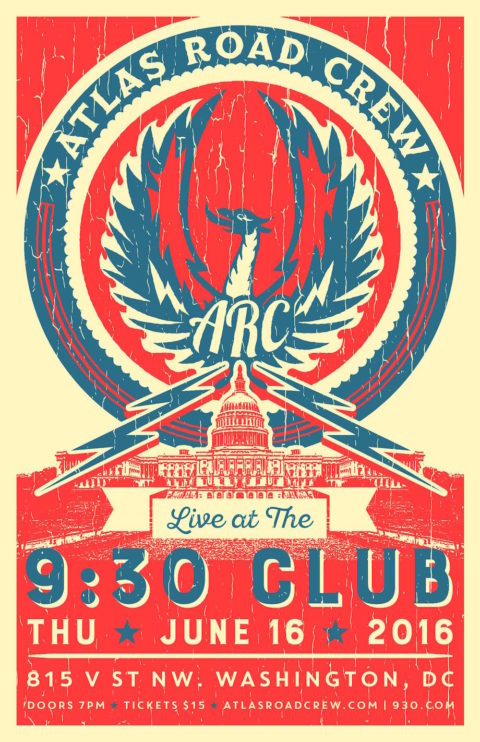 This is going to sound Press-Releas-y, sorry, but I’m a real fan I promise. There’s a show tomorrow at 9:30 I’m really excited about and wanted to share with everyone, I think it could be special– This small band Atlas Road Crew from Charleston, SC that basically calls DC a second home (Their drummer, Patrick Drohan, is from the area). Over the past three years, they’ve grown in venue size from the Fairgrounds, to the Bayou, to selling out Gypsy Sally’s twice, and then selling out the Hamilton this past winter. It’s amazing to see them grow to 9:30, and yes, they get how big of an opportunity headlining the place is! Their sound is rooted in 70s-era southern rock, and luckily don’t get too jammy. Plus the shows are a party. Come out!

South Carolina rock ‘n’ roll shot with southern soul accents. Formed in fall of 2011, Atlas Road Crew is rapidly building one of the most loyal fan bases on the East Coast, packing venues to capacity from South Carolina to New York City, and expanding quickly to major US cities in between.

Halfway to Hopkins is a sonic blast from start to finish, bringing swampy southern accents to fresh, contemporary tunes while managing to capture the band’s blistering live show prowess on tape. The title refers to a small community outside Columbia where the band lived for several years after graduating from the nearby University of South Carolina. “That house, which was halfway between Columbia and Hopkins on the southeast side of town, was where we really began to come together,” Says drummer Patrick Drohan. “We knew then we wanted to become more than just another bar band.”

Riding the momentum of the record release, Atlas Road Crew’s constant touring led them to a six week European tour in early 2016 followed by an aggressive US club and festival run. Aussie rock ‘n’ roll blog 100 Percent Rock sums it all up nicely in their review, saying in no uncertain terms “This is EXACTLY the sort of music we should be listening to right now: bands taking old favourites and adding new directions, writing great songs, delivering ace performances. This is the good stuff.”