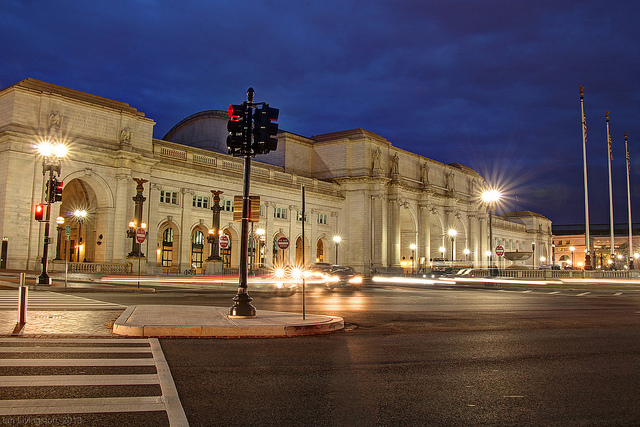 Now that the inside is looking good… From a press release:

As one of 20 historic places selected, National Mall and Memorial Parks hopes to be one of the winners of the campaign to help restore Columbus Fountain. Columbus Fountain, named after Christopher Columbus, is positioned at the grand entrance to Washington’s Union Station and is one of the first historic sites visitors see when arriving to the Nation’s Capital. A $249,000 grant will restore the beauty and aesthetic of this historic sculpture.

“Columbus Fountain currently suffers from significant structural deficiencies. It does not function as it once did, the statuary has been painted over to hide expanding discoloration, and the fountain base is currently boarded up to prevent further damage. The purpose of the project is to restore the appearance of the fountain, providing a welcoming view to visitors of the capital city, and ensure the preservation of the stone structure for future generations to come,” said Beverley Swaim-Staley, President of Union Station Redevelopment Corporation. “We hope this campaign can generate awareness for the greater needs of this Park and serve as a launching pad to assist the National Park Service in accomplishing a complete restoration.”

“Relying on both the cooperation of park partners and input from our visitors, the Partners in Preservation program is a perfect celebration of the National Park Service Centennial,” said Gay Vietzke, superintendent of National Mall and Memorial Parks. “The Christopher Columbus Memorial Fountain greets more the 37 million people arriving in the Nation’s Capital each year and we invite all of Washington to celebrate our 100th anniversary by helping us restore the beauty and aesthetic of this national historic landmark.”

The public is encouraged to vote for their favorite parks today through July 5 on VoteYourPark.org, the online portal hosted by National Geographic, this year’s media partner, to determine which sites will receive preservation grants. The public is also invited to share their experiences on social media and celebrate these sites using #VoteYourPark.

The Partners in Preservation: National Parks campaign gives enthusiasts the opportunity to show their support for their favorite historic sites through a popular vote. At the outset of the campaign, friends groups for each of the 20 participating sites within national parks will receive a grant of $10,000, which will be used to increase public awareness about the historic structures nominated. The national parks with the most votes at the end of the voting period will be awarded grants for historic restoration projects. By voting daily at VoteYourPark.org, supporters can also enter a sweepstakes for a chance to win a trip to Yellowstone National Park sponsored by National Geographic.

The public can get involved by visiting savingplaces.org/partners-in-preservation for more information and voting daily through July 5 at VoteYourPark.org.”