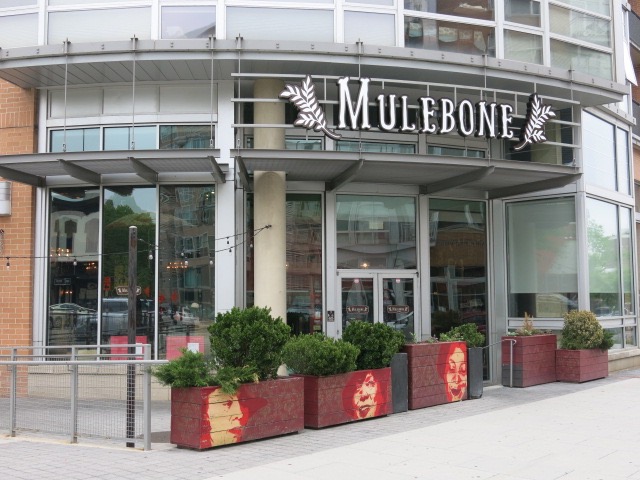 The Settlement Agreement requires: (1) emphasis on food with limited live entertainment, (2) any live music must only be audible inside the restaurant and must end by 10pm, (3) maintenance of a security plan, (4) outdoor patio must close by midnight, (5) reasonable efforts to eliminate rat infestation, (6) signs advising patrons of capacity limits and the residential nature of the neighborhood, and (7) encouragement for patrons to use public transit or park in public garages rather than on residential streets. Mulebone’s current liquor license class is C-Restaurant.

Since both Mulebone and Eatonville before it have been struggling here, I’m guessing they are angling for later live music and dancing – perhaps a restaurant that turns into a club a la Alero (13th & U) on the weekends. My two cents on the “sole beneficiary” argument – the resident who originally entered into the settlement was beneficiary by virtue of his occupancy of the building, not by virtue of his identity as an individual – so whether he moves or not, the intended beneficiary is whoever lives in that unit in the building (probably the unit right above the restaurant). The fact that a residence exists above the restaurant hasn’t changed, so the Settlement shouldn’t terminate. But anyway, not my area of expertise, just my opinion.”