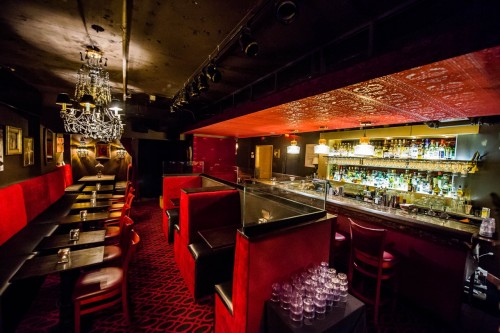 Morris American Bar is opening in Shaw at 1020 7th Street, NW in mid May to early June. This bar is a collaboration between Chef Spike Mendelsohn, his business partner Vinoda Basnayake, and Bartender and Beverage Director David Strauss. Morris will be under full creative control of Strauss, and marks a reunion for he and Mendelsohn. The two were friends while Strauss was living and working in upstate NY and Mendelsohn was attending the Culinary Institute. About 8 months ago the group decided to renovate and reopen The Sheppard [1337 Connecticut Ave, NW], a Dupont circle Speakeasy bar, this time under Strauss’ guidance. Immediately after the collaboration a hotel purchased the building and stopped all plans from moving forward. Undeterred, the group then turned their attention to a property in a Shaw and began planning Morris. Morris will be a larger version of it’s speakeasy predecessor and will have all the great parts such as hand crafted cocktails, an entirely homemade ice program, no standing room, candlelit spaces, and live jazz, but will lose the speakeasy entrance and rules. It will also move from barely 40 seats to just above 70 and will increase it’s bar space and staff to compensate.

Strauss has 17 years experience behind the bar in cities all over the nation. Here in DC he has been the bar manager for Petworth Citizen, beverage director for Le Diplomate, and head bartender for Barmini/Minibar and the original Founding Farmers as well as creating the ice and beverage program for the Copycat Co. on H Street. Most notably Strauss trained under and worked alongside the late Sasha Petraske creator and owner of Milk and Honey NYC, the man most responsible for reinvigorating America’s cocktail culture. David is paying homage to his former mentor at Morris by recreating the style of bartending, in house production, and a full ice program that created the cocktail at the turn of the century. The bar program is based on humility and ice and the American cheers society.

The most exciting part is, if you want to get a taste of what’s to come before Morris opens you can go tonight. After the plans for Morris were complete, the group turned it’s attention back to The Sheppard, the bar that started the collaboration. Basnayake convinced the hotel and new owner’s of the building to let them reopen The Sheppard after all. After sitting vacant for the better part of a year The Sheppard got some new guts and bar equipment and an ice program to round it out. Strauss and the staff that will eventually make a home at The Morris are currently at The Sheppard seven days a week trying a new menu every single day. This is the time to see what they’re doing, the passion is high and they’re practicing, learning, and adapting everyday.”