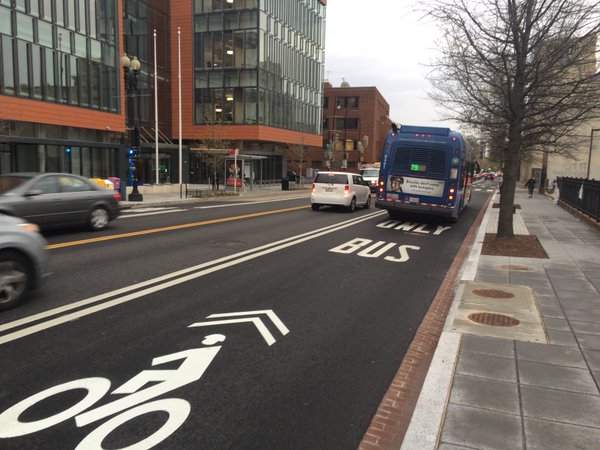 “Beginning Monday, April 11, 2016, the District Department of Transportation (DDOT) will begin operation and enforcement of the Georgia Avenue NW Dedicated Bus Lanes from Florida Avenue to Barry Place, NW. The dedicated bus lanes will be in effect Mondays to Saturdays, between 7 am and 10 pm.

Driving in bus lanes is prohibited for all other motorists, unless they are making turns at intersections or driveways. When making turns, motorists are allowed to enter the bus lane 40 feet prior to turning. Parking is also restricted while the bus lanes are in operation.

A red, high friction surfacing will be added to the Georgia Avenue NW Dedicated Bus Lanes in late spring 2016 to further identify them; however, bus lanes will officially be active and regulated starting next Monday, April 11.

Signage consistent with the operation of these bus lanes will be posted along the corridor.

more stories
Previous
Random Reader Rant and/or Revel
Next
The Best Post Quote Ever: “a police spokesman said he could not confirm the nature of the food item being lovingly tended by the suspect”