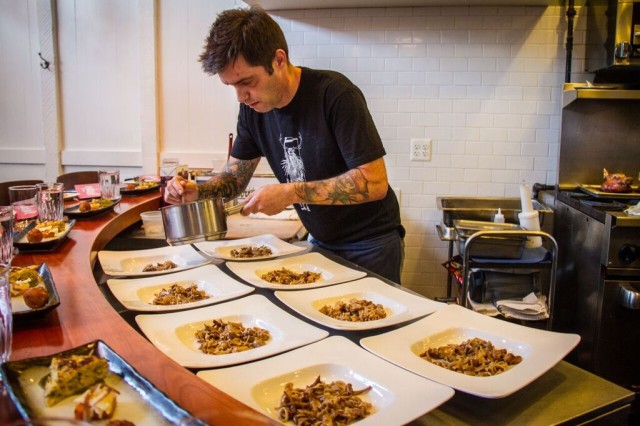 “Chef Alex Vallcorba, who has been working with the ANXO team since its first pop-up back in July of 2015, has become ANXO’s Executive Chef.

Alex Vallcorba was born and raised in Barcelona, Spain and has been passionate about Basque culture since childhood. Vallcorba isn’t new to DC; he has cooked at Obelisk, Black Salt, 2 Amys, and served as Hank’s Oyster Bar’s Chef. In between kitchen jobs in DC, he lived and worked in Basque Country for six months, cooking at Assador Etxebarri: a Michelin-starred restaurant specializing in wood grilling. This experience reflects Vallcorba’s love of ingredient-driven, rustic cooking.

This change comes about as Chef Brad Walker departs from the ANXO team. From Chef Walker:

“I have come to the difficult decision to part ways with ANXO. I absolutely wish them the best of luck in their efforts and look forward to the opening.”

ANXO Cidery & Pintxos Bar [300 Florida Ave NW] aims to reinvigorate interest in traditional cider, one of the Mid-Atlantic’s oldest drinks. A focus on close relationships with local and international cidermakers is central to the ANXO mission, and will enable ANXO to maintain an unparalleled and highly curated selection of cider. ANXO will produce its own cider on-premises with the help of renowned cider-maker Kyle Sherrer of Millstone Cellars. Natural fermentation in oak barrels and a focus on heirloom apple varieties native to the Mid-Atlantic will lead to a limited product that is notably different from the vast offerings ANXO will present from around the world.

ANXO will honor the Basque culinary traditions of honesty, simplicity, and quality by showcasing local producers’ best efforts. The menu will feature pintxos (Basque small bites made to be eaten with cider) as well as heartier dishes one might find at a Basque ciderhouse. In addition to serving house-made cider, ANXO will have an ambitious beverage program featuring more than 20 ciders on draft poured through a custom-built draft system designed to showcase cider as the producers intended. The extensive beverage program will have an additional 20 draft lines dedicated to beer and cocktails, as well as a tightly focused wine program highlighting the lesser-known wines of the Basque Country and surrounding areas.