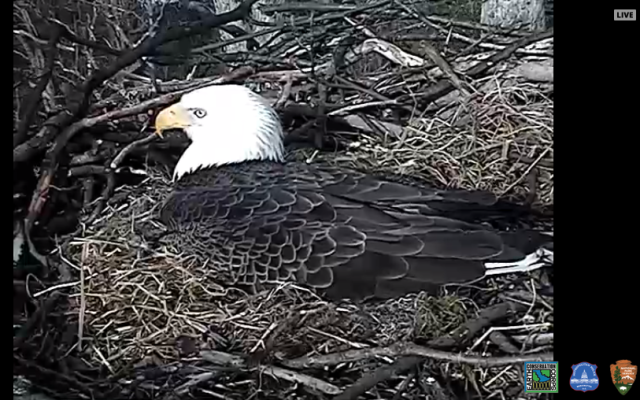 “Meet Freedom and Justice the pair of bald eagles who have taken over the Metropolitan Police Department’s (MPD) Academy in Southeast, DC. This week MPD launched a live streaming of the Bald Eagle Nest Cam after the pair of eagles laid two eggs last month.

Freedom and Justice have nested there for eleven years, one hundred ten feet up an oak tree. On Thursday, February 18, 2016, Freedom laid her first egg at 4:30 pm. A second egg followed at 8:10 am on Saturday, February 20, 2016. The eaglets are expected to hatch between March 23 and 28.

Freedom, the female, has primary responsibility for incubating her eggs and caring for the young chicks, once they hatch. Justice, the male, has the crucial job of catching fish and bringing them for his mate and hatchlings.

The eagles are an urban wildlife success story. Pollution forced the bald eagles to abandon their last DC nest in 1946. In 1994, the teenage volunteers of the Earth Conservation Corps launched a bold experiment to try to spur the return of the bald eagle as a nesting resident of our Nation’s Capital.

Under U.S. Fish and Wildlife permits, the Corps translocated sixteen baby eagles from nests in Wisconsin to an artificial “hack box” at the U.S. National Arboretum. After being raised for six weeks at the Arboretum the juvenile eagles were released into the skies over Washington. Four eaglets were released every spring from 1994 to 1998. Between the eagles restoration efforts the youth of the Earth Conservation Corps galvanized the entire city in their mission to restore the eagles’ Anacostia River habitat.

In the spring of 1999, right on schedule, five years after the first release, bald eagles, Monique and Tink (named after fallen corps members) established the first bald eagle nest in Washington in over half a century. In 2005, Freedom and Justice (named by Chief Cathy Lanier) built their nest at the Police Academy.

In 2015, a third pair finally picked a nest site where it all began at the National Arboretum.

The eagle cameras and an osprey camera as well as a satellite tracking research project are all part of our citizen science program, Anacostia Raptor Watch.”