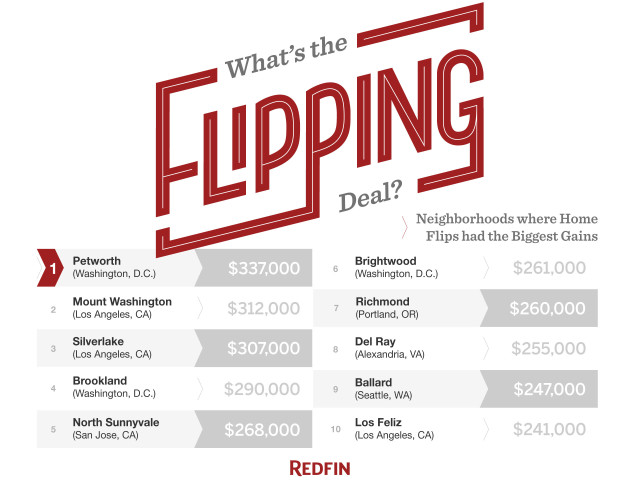 “We looked at neighborhoods in the U.S. with the highest average gains per flip and found that Petworth was the top neighborhood with an average gain of $337k. Brookland, Brightwood and Del Ray in Alexandria also made the top 10 list.

In the DC metro area, flippers gained an average of over $135K between initial purchase and sale. To be clear, these are gains, but not profits as they don’t represent any investments the flipper made for renovations, etc.”

Which Neighborhoods Are Hottest for Home Flips?

Steve Centrella, an agent in Washington, D.C, said, “The golden ticket for developers in D.C. is Grandma’s house, a tired home with solid bones and well-cared-for original elements available at a low price that can be refreshed with an updated look and modern finishes.”

But Centrella warns that buying a flip can be a buyer-beware situation. “If the home is quickly flipped by a novice renovator, you really need to look out for the ‘lipstick on a pig’ situation where the home has been freshened up, but the bones, utilities and roof could be hiding all sorts of unpleasant surprises.”