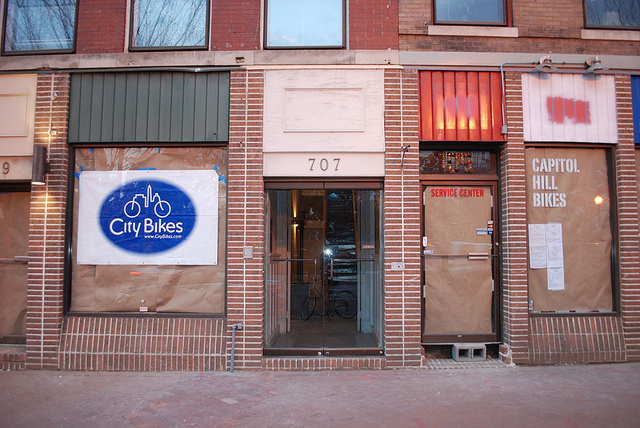 “After 5 wonderful years on Capitol Hill and Barrack’s Row at 709 8th Street SE, City Bikes is moving to Tenleytown at 4810 Wisconsin Avenue NW. The shop will close its doors at 6pm on Sunday, March 27th.

City Bikes would have liked to continue serving the Capitol Hill community, however the existing space was a bit cramped. “We just love the neighborhood and people, and cherish the enduring relationships we built there, but both the indoor and outdoor space is our smallest of all the shops, limiting what models and sizes we need to show to really delight our clients” says Saul Leiken, City Bikes’ General Manager. “The shop performed well for it’s size, with sales increasing over 30% in 2016 over last year,” he added, “we were just getting too big for what the space offered.”

The shop will now move to its much larger upcoming Tenleytown location, which was originally planned as an expansion of the City Bikes brand. Leiken says City Bikes’ “lease on Capitol Hill is up at the end of March, and we had hoped to sign an extension up until just this last week, at more favorable terms given the limitations, to allow us to continue to serve the Hill’s biking community. Unfortunately, we were unable to come to terms on a lease extension, and our landlord informed us earlier this week that we had to vacate the building by the end of the month. We would much prefer a longer goodbye to the neighborhood and to our beloved clients, and encourage HIll bikers to visit us at our other locations in DC and Maryland.”

“City Bikes is thrilled to announce its newest location in Tenleytown, DC! Perched atop one of Washington, DC’s greatest hills near Fort Reno, City Bikes will open a beautiful new bicycle store to serve the residents of Upper Northwest now that the beloved Hudson Trail Outfitters has closed its doors. City Bikes’ traditional bike shop will be on the north end of the old Ourisman Volkswagen dealership, and DC’s largest electric bicycle dealership, ElectriCityBikes, will be on the south end. The stores plan to open in Tenleytown by the end of March, with a grand opening planned for mid-­April.

“City Bikes’ first store opened in 1988 in Adams Morgan, having evolved from an auto parts store that was previously a gas station,” says founder Charlie McCormick. “At that time, City Bikes mission to spread the word about bikes as fun and sustainable transportation was considered revolutionary, to our traditional car culture ­ our 80’s vision of helping make DC a sea of bikes was very different than any other bike shop, where the focus was on competition and drop bar road bikes. We were the first shop to focus on affordable flat bar road bikes and mountain bikes to tackle DC’s potholed streets for daily riding. City Bikes has been honored to put over 50,000 new bikes on DC’s streets, and countless smiles of bike riding joy since first opening. We must be getting close to a million expert bike repairs by DC’s top mechanics over the last 28 years.” In keeping with its mission to enable all walks (and rides) of people the opportunity to experience the incredible advantages of biking over nearly every other form of urban transportation, City Bikes has taken over the old Volkswagen dealership at 4810 Wisconsin Avenue NW. Residents may remember the dealership as being the last remaining new car dealer in Washington, DC.

“Our mission to support all daily riders over the years sometimes confronted client challenges ­ DC summers are so humid that folks would stop riding to work because they would be drenched in sweat, and not everyone has a shower at work. Some clients have aspirational fitness goals that come up short despite best efforts meaning their bike sadly just collects dust at home. Bringing the kids to school or transporting cargo up big hills makes it tough for people to dump their cars, even with the horrific traffic and parking issues in DC. Alter­ability physical challenges are another speed bump for growing the bicycling community,” says City Bikes’ General Manager Saul Leiken.

City Bikes will bring its new electric bike concept to the space in Tenleytown, and open DC’s largest premium electric bicycle dealership, ElectriCityBikes. The e­bike store will feature complete models from Focus, Kalkhoff, and Specialized, as well as offer conversion kits for customers to install on their existing bicycles. City Bikes is excited to have one of Portland, OR’s premier electric bicycle mechanics on board to manage this exciting new store.”

Read more →
More Stories
“Two of the spaces are frequently given tickets (as in over 10 per day) and appear to be targeted by the parking enforcement employees.”“Sign-up for the Bright Beginnings 5K Race to support local homeless children April 30th!”